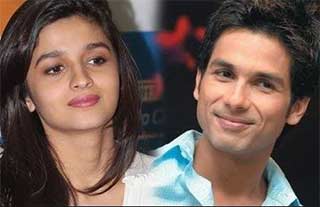 Alia Bhatt, who has confirmed she has signed Vikas Bahl's "Shaandar" for a role with Shahid Kapoor, says she's a fan of the actor, whom she first fell in love with when she was all of 11.

"I'm a huge Shahid Kapoor fan. I must have been 11 years old when I went to see Shahid in 'Ishq Vishk' at Gaiety-Galaxy (in Mumbai). I've been a fan since then. He is a fabulous actor and from what I hear, a very supportive co-star," Alia said.

Shahid is a generation removed from most of the co-stars Alia has worked with so far.

Gently, she corrects that by saying: "You forget I've done 'Highway' with Randeep Hooda. But yes, that apart, I've so far worked with actors my own age. So there was a natural comfort level with them.

"But it's not like Shahid is any different from Varun Dhawan, Arjun Kapoor or Sidharth Malhotra. He is a very chilled-out guy. He has been around for so many years. I am sure he's a thorough professional. And I am really looking forward to working with him."

The actress, who was recently seen in "Humpty Sharma Ki Dulhania", admits there is plenty on the plate. But she isn't allowed to speak about them all as yet. She is, however, excited about "Shaandar".

"I'm very excited. I loved his (Vikas Bahl's) 'Queen'. And I am really looking forward to what he does in the film with me," said the "Highway" actress.

"Shaandar" is to be shot in an undisclosed part of England later this year. Bahl's last film, the much-lauded "Queen" had been shot in Paris, one of Alia's favourite cities where she got a chance to holiday recently.

"I am very excited about this film. It's something I haven't done so far. I want to work with every major actor," she said.