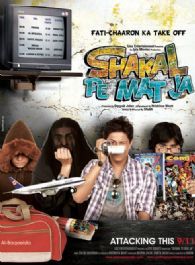 'The film was one of the most wonderful experience and involved a lot of hard work,' said Bhatt, who made her debut in B-town with the 2001 movie 'Ashoka' opposite Shah Rukh Khan.

'Many actors have their own production house... Many female actors are also having their production houses. I have been thinking of doing it for last two-three years. Finally we got going. I wanted to make something else and I landed up making this one,' said Hrishita at the sidelines of Provogue Autumn-Winter 2011 collection.

Hrishita has co-produced the film with Linc Entertainment. She is excited about her debut production, which is about the story of four boys caught as suspected terrorists at the Delhi airport while filming a landing on their handy cam.

The film is releasing Friday

Will she continue producing films?

'If this film is encouraged, it will be definitely be something I would continue doing besides acting,' she said.

'After 'Charas' and 'Hasil' I did the item song for Tigmanshu Dhulia's 'Shagird'. I would continue doing item songs if I get really good item numbers.'