Filmmaker Jagmohan Mundhra's sex comedy with Govinda is titled 'Excuse Me, Please'. The actor plays a 40-year-old virgin in the movie and says he will pretend he is one.

'Yes, it is a sex comedy. How do I play a 40-year-old virgin? I'll just have to fake it, ha ha. I guess that's what acting is. I've never touched alcohol in my life. But I've played a drunkard. Till the age of 36, I had never eaten non-vegetarian food,' Govinda told IANS.

Remember the notorious song 'Sarkaiy lo khatiya' that Govinda performed with Karisma Kapoor in 'Raja Babu' 14 years ago? In 'Excuse Me, Please', he is once again shooting a full-on desi rollicking version of the comedy. The movie went on the floors June 1 in London.

What interests Govinda in the project is his return to a raunchy risque realm, which many thought he had left behind. 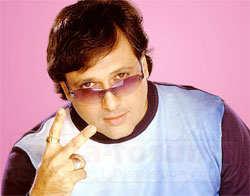 'Why should I leave it behind? I am what I am today because of those films with David Dhawan like 'Hero No. 1' and 'Raja Babu'. I am not ashamed of 'Sarkaiy lo...'

'At the time when it was filmed, I said sorry because it offended some people. But going by what's permissible on screen today, I'd say me and Karisma did nothing harmful.'

In Mundhra's film Govinda plays a commitment-phobic nerd who wants sex but no marriage.

'The subject was earlier explored in Akshaye Khanna's character in Nikhil Advani's 'Salaam-e-Ishq'. All of us want the perks of a relationship with the opposite sex, including sex. But no youngster wants to be tied down with marriage. I sat down with Mundhra and discussed the script. I don't think the original material would've worked in our context.

'We've altered the subject to make it a comment on the young NRI generation in England, which gets a liberal chance to mix with the fairer sex of all nationalities.

'But when it comes to saying 'I Do' they all run the other way. In this way, I'll be putting across a social message through raunchy laughter. I've always done that in my films.'

The challenge for Govinda is to put across the message and comment on the atmosphere of sex-with-no-strings-attached without losing the balance.

'See sex is an integral part of the film. So it will be sexy. I feel nothing done in moderation is wrong. That's what we say in the film. Let's see how it goes. After principal shooting, I go straight to my new film for Vashu Bhagnani and David Dhawan. So I'm in London with my family for the next few months.'

London is a city that relaxes Govinda.

'And look at the irony. While a man like Mundhra, whose last two films dealt with serious social issues, is taking me back to the 'Sarkaiy lo khatiya' days, David's film will be a departure from what we've done so far.'

Either way, Govinda, who gave a hit like 'Partner', is happy.