Jay Bhanushali, the chocolate-boy of television has been nominated for the IDEA ITA Champion Male along with Raja Hassan, Indraneil Sengupta and Chaitanya Chowdhury. 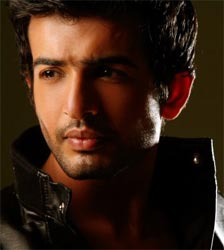 Featured Video
A very surprised and elated Jay said, “I was shocked when I got to know that I can be nominated in the Popular Category. It feels nice to see that people still love me and tolerate me”.

The nominations have been got by Popular poll on mobile, internet as well as postal vote. When asked whether he looks forward to interact with his fans in 5 big cities of India, Jay quips, “I am looking forward to meet my fans, for sure. But I will not ask anyone to vote for me. If people think I am popular, then they will vote for me”.

Remind him about his stint in reality shows when he did ask for votes, and Jay at once states, “In reality shows, I used to ask for votes to stay in the race for one more episode, so that I could get noticed more. But here, I don’t think that can happen”.

Jay who has not been part of a daily soap since the time he left Kayamath says, “I want to do something now, as I fear people will forget me (laughs). I am getting lots of offers, but I am being very choosy at the moment”.

Ask him about his dream role and pat comes his reply, “I want to play a college boy who is very naughty, with room for comedy in my role”.

Well, for now we wish Jay all the very best!!

13 years ago i wish him all the best! i stopped wtching kayamath since he left! i wish he cms in another serial!

+ 5
13 years ago Yaa. where r u? Missing u so much in kayamath..arggh! This ekta always replaced main lead..missing u wis prachi..:(
& all d veryyyyyyyyyyyyyyy best 4ITA..Hope u win..

+ 2
13 years ago jayyyy is the bestt!!!! but chaitanya is good too....it will be a tough competition