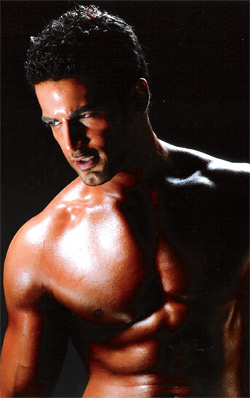 Ashwini Dheer, but the actor has lots of nice things to share about his co-stars..


"Suneil sir, Tushar and Pareshji are undoubtedly great guys. They have been around for years, but have absolutely no air around them. With no hang-ups whatsoever, they made me feel quite comfortable on the sets", states Upen Patel, as he clearly indicates that things are not that good when it comes to his chemistry with the director.

Talking about his guest appearance in 'One Two Three', Upen states, "I and Tanisha play two youngsters madly in love with each other. I played the part mainly because Kumarji (Mangat) wanted me to do it. See, I don't work with newcomer directors, as can be seen from my track record where I have worked with the likes of Abbas Mustan, Suneel Darshan and Vipul Shah. Still, Kumarji is a very sweet guy and there was no reason I could have said no to him."

Well, the actor now realizes that he took on a big risk by accepting a guest appearance role. "I guess I would continue to have my doubts around special appearances. I started getting apprehensive the moment the first poster of the film was out. There wasn't clarity around whether I would be in the front row or the back row. There are so many actors in the film. Kabhi aage kabhi peeche, I was thinking ki chalo rehne hi do. In any case, I have a small role to play in the film", says Upen giving a hint that it might be a 'No' for guest roles from now on.

Happy for his solo number in the movie,'Rocky Mahi', the actor says, "It's a fabulous song by Raghav Sachar. The beats are groovy and it was fun dancing to its beats. Tanisha looks quite glamorous and together we had a blast doing the number. It is nice to see appreciation coming in, as the song has been set on a grand scale and has a great club-feel to it".

A macho-man look with a bare-body is what the viewers can expect in this song, from Upen. "Well, I am not sure how much of it has been retained in the song, in the edited version. I had worked hard on my body and I am shirtless in a part of the song. I am eagerly waiting to see the edited version to know how much of it is still there", quips the visibly tense actor.