Mumbai, Aug 14 (IANS) Director Sriram Raghavan is all set to turn Saif Ali Khan's childhood dream to play a secret agent into reality with his espionage thriller 'Agent Vinod', being produced by the actor himself.

Talking about his first film as a producer, Saif told IANS: 'I want to produce anything from an espionage thriller to a period murder mystery which might not make too much money, to an off-the-wall romantic comedy, any slice-of-life film.'

Apparently, 'Agent Vinod' would be a full take on the James Bond-Tom Cruise genre of sensuous spying with Saif dressed in the best, wooing and bedding some of the most glamorous women in the industry. 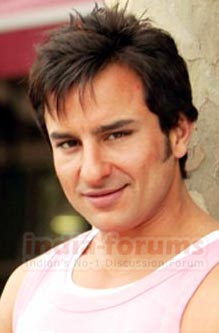 'I'm not looking at making money here, though it'd be nice if my productions do make money. But my partner and close friend Dinesh Vijen and I are making films that other people wouldn't want to make with me,' Saif said.

Ever since Rajshri made the low-budget 'Agent Vinod' in 1977 featuring the then rising Mahendra Sandhu (whatever happened to Sandhu?) as the spy who loved girls' gadgets and stunts, Saif has been fascinated by the thought of doing a take on the title.

'Though our Agent Vinod will have nothing to do with the old Rajshri film of that name, it would be exploring the same espionage territory, albeit in an entirely new idiom,' said Raghavan, who did a career-turning film 'Ek Hasina Thi' with Saif.

'Saif and I had been brainstorming over this project for a long time and yes, now it's on,' he added.

Saif, currently sporting a moustache for his role in Yash Raj Films' 'Tashan', is all set to lose weight to look lean mean and macho to play Agent Vinod.

Said Saif: 'I looked sinewy for 'Ek Hasina Thi'. I can do the same again.'