Just out of his teens, Adhyayan Suman is all set to rock Bollywood with his debut in Kumar Mangat's Haale-e-Dil. Better known as Shekhar Suman's son, the young and handsome actor will be paired opposite Amita Pathak (daughter of Kumar Mangat) and newcomer Nakuul Mehta in this love triangle. 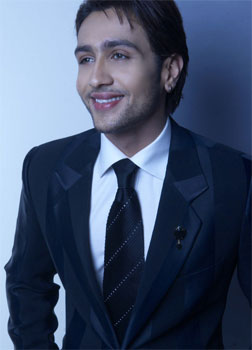 Featured Video
Brought up in a family where he has seen his dad going for shoots regularly, Adhyayan has had a very interesting childhood. "I used to watch all of dad's movies and television serials and hero worship him. I would even try out his clothes when he was not at home!" says the young actor who completed his initial schooling in Utpal Sanghvi School and later went to Millfield Public School, London.

You may not believe it when you see him today, but Adhyayan was apparently overweight when he was in his mid-teens. "I always wanted to become an actor but by the time I turned 15, my weight became over 110 Kg. My dad ticked me off and said with my physique I could be anything but a film hero". The newcomer confides that he started workouts and managed to lose 10 kilos, but only to gain more later. That is when he went to the New York Film Academy for a course on acting and film direction. "Here, my outlook changed completely and I managed to lose 45 kgs in a span of few months!" recollects Adhyayan.

How did he land up with the hero's role in Haal-e-Dil? "It happened in a saloon where I had gone for a haircut. After I was done and about to leave, my hairstylist requested me to stay back for some time. I wanted to know why, and before he could say anything I saw Ajay Devgan walking in. Since Kumar Mangat (Ajay's secretary) was looking for a fresh face and Ajay liked me, the deal got sealed in the saloon!", explains the hero of Haal-e-Dil slated for release later this month.

Talking about the film where Adhyayan plays the role of Rohit, a guy who is in love with Amita Pathak, the actor says "It was a fascinating experience working for this film. We even shot on the Indo-China border in Ladakh".

So what are his future plans? "I want to become a film director by the time I turn 30. I want to direct a film. But before that I want to act in a variety of roles and in every genre," says the hero.

14 years ago he has loads of attitude and is really snobby.. he came to the show in New York, and he wanted two body guards and several entertainers around him to amuse him and entertain him while he waited to go on stage... i mean are you suppose to be rehearsing and not sitting in A.C. room and getting entertained... and not to mention, he walked in to the dressing room where girls were changing and didn't even apologize, so much for his professionalism...

14 years ago Cool...
He will be successful like is dad

he is good looking too hehee