Manoj Tyagi has won the National Award for Madhur Bhandarkar's 'Page 3'. Now he is ready with his directorial debut, 'Mumbai Masala'. He is optimistic about this film that deals with life and loneliness in the city of Mumbai. He tells us this, and more, in an exclusive chat.

Q. What is 'Mumbai Masala' about?
A. It is a romantic comedy. Mumbai Masala is the name of a pub, where performers and artists meet, and their lives intertwine. The story is how their lives proceed from here – their romances, their confusion, their shortage of time, etc – and how these situations are tackled.

Q. Where did the concept for the film come from?
A. I wanted to make a romantic comedy. I took real life situations, from my life, as well as the lives of some of my friends, and made 'Mumbai Masala'.

Q. Is the story inspired from the corporate world? 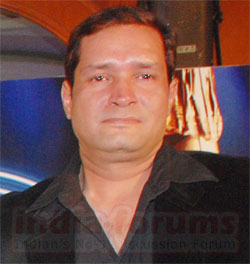 A. Not just the corporate world, but the lives and worlds of other professions as well. It is the story of an ordinary citizen of Mumbai. There is also a salsa instructor, a gym instructor, a salon owner, etc. It will seem familiar to anyone who lives in Mumbai.

Q. You are considered a realistic writer. Is this film realistic?
A. Realistic, yes, but not too heavy. The film showcases the loneliness and tension of a Mumbaikar, without getting preachy.

Q. From National Award winning scriptwriter to director – do you think the audience expects a lot from you?
A. I am sure they do. It is natural. I take this as a challenge, and I hope I will not disappoint the audience. With expectations, come responsibility. Your responsibility increases two-fold when there are hopes pinned on you.

Q. Vikram Bhatt is a director himself, and this is your first film. How much has he helped you?
A. He gave me a lot of support. He is my friend first, and a producer later. We know each other's likes and dislikes. He read my story, and decided to take the responsibility producing this film, and he has been a strong supporter from the beginning till the end of the film.

Q. Did he try to change any scene according to his liking?
A. That is but natural. As a producer, he had his say, but we always had a discussion before finalizing anything. We did not let our egos get in the way, and always gave the quality of the film our first priority.

Q. You said you were challenged that you cannot write a comedy. Is that why you made this one, to prove them wrong?
A. I was not challenged, but yes, my reputation was that I could only make serious films. I challenged myself, not to prove anything to anyone. I can tell you how successful I was at that, only once the film is released. I am sure the audience will like my movie. And that they will expect me to write more romantic comedies.

Q. Will you still make serious films?
A. Definitely. I would want to make films in all genres.

Q. Will you continue to be a writer, or will you continue direction and other aspects of filmmaking?
A. Let's see…I may produce films at a later stage, you never know. I take each step cautiously. 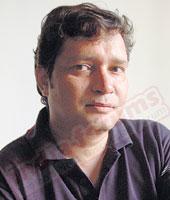 Q. Although you have written many films for Madhur Bhandarkar, who would you consider your guru in filmmaking?
A. I have been influenced by Madhurji and Vikramji, but my style differs from theirs. My gurus are all the filmmakers whose films have inspired me, like Hrishikesh Mukherjee, Basu Bhattacharya, Mani Ratnam and Ram Gopal Verma. If fact, Ramuji's films have inspired me a lot.

Q. Although you have written most of his screenplays, you were missing from Madhur Bhandarkar's 'Traffic Signal'.
A. (Laughs) I was not missing. Actually the movie was all about Mumbai, and I am not a Mumbaikar originally. That is why Madhurji opted for Sachin Yardi, who is a true Mumbaikar. If you think there are differences between Madhurji and I, then you are mistaken. If there is a chance to work together in the near future, we most definitely will.

Q. Tell us about PNC's latest with Ramu – 'Sex Haazir Ho' – based on pornography.
A. That project is closed. Here, everything is on paper, and it never moves forward. The less said about the project, the better.

Q. What can we expect from you in the near future?
A. That depends on the outcome of my first film. I have a lot of stories, and I have to get producers to believe in them, and like them, before I can move forward. There is no particular film or story that I can tell you about.