Shah Rukh Khan tops her list of favourites. After a career spanning 12 years and 40 films, Shah Rukh is still the man who holds 'a special place' in Rani Mukerji's professional life.

'I was considered a newcomer in 'Kuch Kuch Hota Hai', but Shah Rukh never let me feel like one. The treatment he gave in spite of his superstar status then overwhelmed me,' Rani, who made her debut with 'Raja Ki Aayegi Baarat' in 1996, said.

She said Shah Rukh had always guided her in the right direction and she had gained a lot from him.

'I respect his dedication and the extra effort he puts towards his work. I still learn a lot from him,' Rani told IANS on the sidelines of a function here. 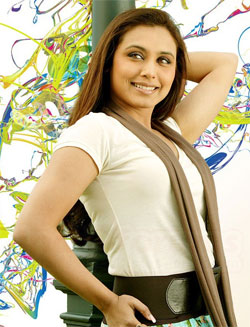 The two have acted together in several films, including hits like 'Kuch Kuch Hota Hai,' 'Kabhi Khushi Kabhie Gham', 'Chalte Chalte' and 'Veer-Zaara'.

They were also seen together in the critically acclaimed offbeat film 'Paheli', which was based on a short story written by Vijayadan Detha.

Queried about her rapport with Saif Ali Khan, with whom she was seen in 'Hum Tum' and 'Ta Ra Rum Pum', Rani said: 'In my recent film 'Thoda Pyaar Thoda Magic' it was a good experience working with him. But while doing 'Hum Tum' we had some reservations. With time, we get along well and have mutual respect for each other.'

In 'Thoda Pyaar Thoda Magic', which is releasing June 27, Rani says she essays the role of an angel who has been sent by god to bring happiness in the life of a business tycoon and four orphan children.

She had to do a lot of practice with action director Shyam Kaushal, especially for the flying scenes.

'The speciality of the role is that I have to smile throughout the film unlike my other films where I had to cry as well. Even my fans told me that they have had enough of my crying. So this film is special for me and my fans; besides, 'Thoda Pyar Thoda Magic' is my only release this year.'

In real life, her angel is her two-year-old niece Myiesha. 'She keeps me smiling. Whenever I am free and have some time, I play with her. She keeps me going.'

Famously reclusive when it comes to parties and social appearances, Rani said emphatically: 'I don't like parties. I am more of a family person. I prefer spending time with my family.'

Rani has been paired with almost all superstars except perhaps Akshay Kumar.

'Many projects came to me where Akshay and I were paired together but somehow the roles didn't excite me.' Refusing to name the films, Rani said many of those did well. 'But, we hope to do a film together.'

The talented actress has cut short her assignments because roles don't excite her any more.

'The roles or the stories that came my way did not excite me. I don't want to do a film just for doing it or to please the journalists. There was a time when I did even three or more films at a time. I did 'Veer-Zaara', 'Mangal Pandey' and 'Black' together because the roles excited me.'

Her much talked about marriage plans are dismissed.

'You people are too much interested in my marriage. But let me tell you that I don't have a marriage plan for a long, long time. I want to do a lot of films now and don't see marriage in the near future.'

Rani's next project is a Yash Raj Film production with Shahid Kapur to be directed by debutant Anurag Singh. The yet to be titled film will go on the floors in June.