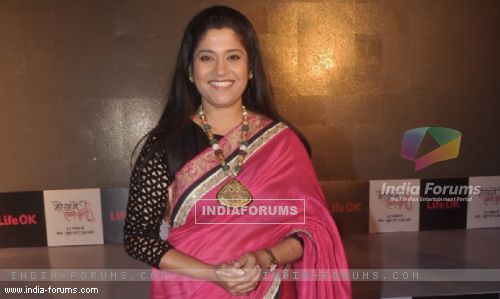 One actor who has been loved for her smile, acclaimed for her acting and appreciated for her looks is all set to come back on the small screen with a fiction show Mere Rang Mein Ranganewali on Life OK. Yes, she is the timeless beauty Renuka Shahane who has won millions of hearts and accolades for her performance. In this candid chat with TellyBuzz, she speaks to us about the show, characterizations, praises for the Rajshri as a production house and much more. Read on!

Firstly, how is it working with Rajshri after 20 long years?
Actually this is the role that I was told that Sooraj Barjatya ji wanted me to play. So definitely there is no way I would have said NO to Rajshri Productions. It really is a co-incidence that 20 years of Hum Aapke Hain Kaun is over and I am still working with Rajshri and I am so proud of the fact. With Rajshri, it is like coming home because the production house has not changed a bit also even after so many long years. It is such a pleasure working with them and I really like the concept of Mere Rang Mein Ranganewali because it is very reminiscent of Maine Pyaar Kiya. They have even used that movie's song as their title for this show. Also, the concept of this very young love story of a boy and a girl fascinated me to do the show.

All the happiness, energy, the sense of humor that comes along with a young cast is definitely going to be seen on screen. I main thing I personally love about Rajshri is that there no sort of negativity around. Even if there is a difference in the opinion, it is treated in a very subtle and a respected manner. Nobody is disrespectful with each other. All the characters in the Rajshri show or a movie are given importance and are made very prominent.
What kind of character are you playing in this show?
I am playing a very interesting character. I am playing a professional lawyer and I am the mother of Radha's (Pranali Ghogare) best friend. This concept actually is very strange because you have never seen something like an accidental marriage in the any of the shows on television. And then what happens? Do the two of them fall in love or they fall apart. What happens is the base of the show. They are too young to take the decision of getting married and since that matter of choice has been taken away from Radha's hand, how does she deal with it. Her journey in literal sense will be seen by the viewers.
You have worked with Sooraj. How was it working with his son for this show?
I met Sooraj ji's son on the sets and I was so happy to see him working now. The generation has changed now and I had seen him as a little child on the sets of Hum Aapke Hain Kaun and now he is such a grown up. It is actually very touching and emotional experience. I have worked with other production houses as well but the level of detailing that goes into what Sooraj ji does, the whole atmosphere he expects to be on the sets is retained and I am happy for the that. I just can see myself working in an atmosphere of cacophony where everything is disorganized.
One peculiar thing that we have noticed will stand apart from other Rajshri shows is the nuclear family that it has introduced. What do you have to say about that?
In Mere Rang Mein Ranganewali, the very interesting thing is that the girl's family is a nuclear family. Rajshri has seldom dealt with the nuclear family set up. They more often are known for the joint family system. Here, in this case, nobody is wrong but it is the circumstance that make them do certain things. One thing is for sure that this show can be seen with the entire family. There is no doubt in this.
How is it re-uniting with the Rajshri faces again after so many years?
It is absolutely amazing to work with someone with whom I have worked earlier. Though I am not working with Alok Nath ji but he is a part of the show. I have also worked with Mahesh Thakur ji earlier. I am extremely enchanted to play a role in a show like this. Maybe later on, eventually my character may develop in a way where I can interact with them. So yes, I am looking forward to that.
Lastly, message to all your fans
Just keep the faith. I am just too grateful and it is a humbling experience because I have not done anything great for a long time and yet people like me and keep loving me. I just want to thank them all.
TellyBuzz wishes Renuka Shahane all the good luck for her future endeavors!
Upasana Patel

frivschool 8 years ago nice photos.. i am fans of her ! i'd like this look !

bgossip1 9 years ago I do not agree with her comments, they are totally baseless.

9 years ago i jus hate veena malik. she is very stupid gyrl.nd she is a big big shame for us pakistani women. nd whole pakistan.i dunno why she is doin a swamyar on ndtv imagine.

+ 2
9 years ago chill guys
jab koi indian actress yeh kaam karti hai then she is hot sex an what not jab pakistani veena malik n yeh kam karliye to kya qyamat a gayee!
dont fake ur self guys! life is too much short for all this
for me she was never ever a human being! and veena malik koi sharref ghar ki larki bhi nahin
she is a prostitue!

ssamina 9 years ago she is a shame for pakistani women, she is also disgusting and sick etc. She will do anything for money. Money isnt everything in life. I also wish pakistan never take her back as she is pathetic women i have ever seen.

Bollywood actresses are better than her.

veena idiot... do NOT come back here to Pakistan.

in swayamvar's promo u said u got freedom money n all in india plx stay there then.. or leave india too.. dnt make it dirty too.!
just go to hell!

+ 6
9 years ago dude.. you are a woman.. have some shame.. you are basically putting forth a price of your reputation+body.. so it means if somebody had 10 crore.. they could buy you and owe you? HOW CHEAP ms.whoever you are.. -_-