View Profile
Yuvika Chaudhary is going great guns after a short role in Shah Rakh Khan's Om Shanti Om. This cutie from Uttar Pradesh is all set to unleash her acting skills in a youth based film titled Summer 2007. This much delayed film also stars Sikander Kher and Gul Panag. A little tête-à-tête with the charming Uvika…

Why was the film delayed?
I have no idea, may be the shooting just got over now.

What is your character in Summer 2007?
I play a middle class girl called Priyanka who is trying to live up like the ones among her rich carefree college friends. But despite trying to be like them she still has not forgotten her values.

What is the USP of the film?
It's a very today’s film. All youngsters will be able to identify with the issues Summer 2007 throws up. 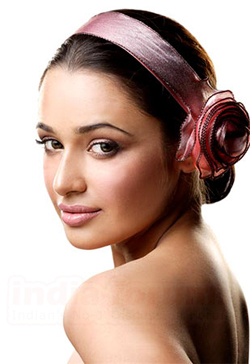 
How was it working with co-star Sikandar Kher?
It was superb. He has no air around him. He was as hard working as any other new comer.

Do you have a glamorous image in this film?
No, I don't have any sexy image; rather I have a very realistic look in the film. My dressing style is just like any small town college girl.

How does it feel to move from playing a small role in OSO to a lead role?
It feels really good. My career is moving in the right direction.

Any pre-release jitters?
I am eagerly awaiting the release on coming Friday like any other actor. We all have worked hard and made a very good film, now it's up to the audience to give their approval. Newcomers in the industry like us deserve all the help and love we can get from the audience.

How was the experience of shooting?
We had lot of fun pulling pranks on each other. The positive atmosphere was such that we hardly knew when the days passed by.

But there are so many newcomers around these day?
See, this is a phase. Remember at one time even Shahrukh Khan was a struggler, but by sheer hard work, see where he has reached today.

Given that OSO had Shahrukh Khan and Deepika Padukone, do you think people even would have noticed you?
In spite of the fact that I was hardly there, people still call me by the character named Dolly. What more can I ask for?

You were absent during the promotion of OSO?
I wanted to be there but unfortunately the shooting of Summer 2007 was going on in full stream at that time. Farah Khan had asked me to join the unit, but I had to politely decline.

Any other films?
No, at present I am only looking forward to Summer 2007. Once it's released, I will look at other projects.

Will you agree to wear short clothes in future films?
I have no problem wearing hot costumes provided they do not look vulgar.

You had done some TV shows before, will you return to the small screen?
As of now, I only want to look at films. It's always good to do one thing at a time.

Which male star would you want to work with?
Obviously I can’t I work with the same star again and again. So I would want to share screen space with all Bollywood biggies starting from Salman Khan to Akshay Kumar etc.

What is your personal fashion style?
I am basically a jeans and T-shirt person as that way I am free to jump around and do my own things.