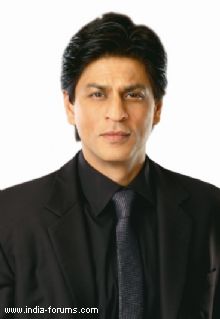 New Delhi, Aug 31 (IANS) He isn't the Bollywood Badshah for nothing! Superstar Shah Rukh Khan not just believes he is the best, he is confident that no one can compete with him because others 'don't run the same race' as him.

The 45-year-old charmer talked uninhibited about his success story, and narrated how he gives 'thorns to competition' at the launch of an eponymous book on marketing, co-authored by management guru and film producer Arindam Chaudhuri and his wife, Rajita.

SRK shared his experience with his first producer, who was keen to know why the 'thin and dark' young man with 'hair like a bear', wanted to join filmdom.

'I told him - 'I want to make people smile because it makes me happy.' He said - 'This is very ideological. Genuinely, tell me why do you want to be a movie star?'

'I told him my ideology, which is my ideology even now... I told him that my parents have died. So I want to make movies so damn bloody big... that my parents somewhere sit down on a star and from there also can look at their son and say 'I can see his movies from here better than I can see the Wall of China or anything. We see his movies covering the face of this earth',' added Shah Rukh, explaining the importance of setting the right targets in life.

'That is my target. It may seem a bit too much of self-importance, but I don't think anyone can compete with me because they don't have a target like that... I have a genuine emotional target. So you've got to know your target,' he added to a thunderous applause.

Shah Rukh, or King Khan as he is lovingly called, may have many rivals in the film industry but he says he deals with competition a little differently.

'Winning is not about trying to undermine someone's success... what you need to do is to go on the parallel road! You decide that you go and change the game. In my life, I have always decided to change the game...

'I am making the biggest film this country has ever made ('RA.One') and I will be proud even if it flops and does not succeed because I want to change the game I play. I do not want to be in the same playing field as others,' said the actor, who is said to have invested over Rs.150 crore in the making of the superhero film.

Shah Rukh has been in Bollywood since he made his debut in 1992 with 'Deewana' and year after year he has been enthralling viewers with entertainers like 'Baazigar', 'Dilwale Dulhania Le Jayenge', 'Kuch Kuch Hota Hai', 'Devdas', 'Swades', 'Chak De! India' and 'My Name Is Khan', and says: 'I want to die giving the last shot of my film.'

'I am a big believer of selling dreams. Everything comes at a price... life comes at a price tag of death itself. Except for the emotions that parents and children share, everything is for sale... I don't come for free either. You can make me do an item number in films, dance at a wedding, do street theatre as long as it makes people smile. I am a proud seller of dreams... and as long as it makes people smile, I will do it,' he said.