Gauri Pradhan Tejwani will be back on television after her maternity break with Imagine's chat show Meethi Chhoori No. 1. The actress talks about her experience being part of the show, her life after becoming a mother and much more in this conversation with TellyBuzz.. 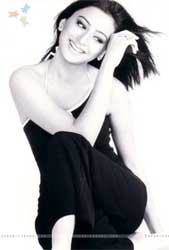 How was the experience meeting your Television co-stars after a break thro' Meethi Choori No. 1?
It was a great experience. Even though we are not that close buddies, yet we do know each other well. The shoot was fun with all the funny comments being churned out, but nobody felt offended.

What kind of a reaction is expected from your husband Hiten Tejwani?
He's going to rest back and enjoy it thoroughly.

Did you experience any personality change after being a mother?
Yes, of course when I was expecting, my friends had warned me to get ready for sleepless nights post pregnancy. Now that I'm blessed with two angels, I'm undergoing a personality change.

And how's Hiten as a father..
He's like a third kid at home (smiles). But on a serious note he loves them a lot and during the first four months he had been with me completely like a second mother.

How was it facing camera after the break?
It was really nice. I had never thought that I would miss it but today after getting back to TV, I realized that I'm missing it. It was fun and with 7 other women what more can you ask for.

So any plans to do daily soaps in time to come…
If viewers want me to do I don't' mind, but personally I'm looking forward to something more substantial.

What's your take on the present trend on television?
I'm really not happy with the present trend, so I don't watch much of it. TV is like banned at my place especially after the kids came. And whatever little that is being televised I don't wish to be a part of the same. I find most of them very regressive; I wish to be a part of some progressive show.

Any serial that you have been following these days.
Frankly I don't follow much of television, in fact I have not even watched my own shows. So I don't view anything in specific.

Then what made you take up this show on Imagine
I really loved the concept. I mean who would wish to skip the opportunity of spending quality time with 7 other women and talking their heart out on topics which one can't speak at usual times.

10 years ago ya will looking fwd to see u with hiten :)

10 years ago ya welcome back on tv looking fwd to see u back with hiten now :)

+ 2
10 years ago its nice to see your int after a long time.
gauri i am anxiously waiting for that day when you and hiten will come together on the tv screen.

10 years ago Nice to hear from you gauri..will looking fwd to see u back with hiten in progressive show..:)

+ 3
10 years ago hey plzz return back with a good show obv..not this crap show which are coming now...WANT TO SEE U BACK!!!