View Profile
Starting his career with the 1990 film "Trinetra", Jaydeep Sen, has worked with many veteran directors. The talented man has come a long way as he is directing his first film under the banner, Filmkraft, a Rakesh Roshan company. Here is the man talking of his experience directing the film, 'Krazzy 4'...

Q.: How was the experience of "Krazzy 4"?
A.: It's wonderful. Besides Rakesh Roshan, his people at the Filmcraft and the actors, all were very supportive. In a nutshell the experience is really memorable.

Q.: As an assistant director, you have always been attached to serious films. But why did you start your journey as a director with a comedy?
A.: There is really a good thing about the movie and that is all the four heroes in the film, Rajpal, Arshad, Irfan and Suresh, start their journey with comedy, but complete as heroes of humanity. There are many entertaining moments that the audience will surely enjoy but I would better call this film a social satire and not baseless comedy.

Q.: Rakesh Roshan supported you all throughout the project. How did you win his faith?
A.: I already have assisted him in his last two films "Koi M 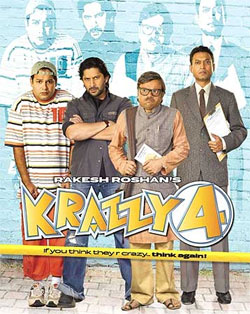 Featured Video
il Gaya" and "Krish". I have learnt a lot from him. I guess he realized my ability while I worked for him. I hope the result of my film will help me retain that faith.

Q.: You have assisted Rakesh Roshan. How is your work affected by his style?
A.: All his films have both quality and sensitive entertaining factors. Even I tried to make such films. I have observed him doing his homework before every scene is shot. I also maintained the tradition and completed all my pre-production before hitting the floor. That's why I completed the film within the schedule and we had no problem with dates of actors. And at the same time, I faced no problem directing it.

Q.: How was the experience of directing Shahrukh for an item number in the film?
A.: Most of the responsibilities of directing Shahrukh were on the choreographer. But sharing time in work place with such a star itself is a big thing for me. Four working days made me realize that Shahrukh is a great human being. I felt as if Shahrukh and Rakesh Roshan belong to the same family. They are not only perfect professionals and excellent actors, but also honest and down to earth people.

Q.: You started your career in 1990 with the film "Trinetra". Don't you think that you took too much time reaching this position?
A.: Yeah, I also think the same because eighteen years is really a long time. People always ask me the same. And I always reply saying that nothing can be achieved before time and without the support of luck. Maybe it was destined for me in that way only. I have no grief over the matter. And I guess it proved better for me as I couldn't have got a better film or mentor than what Rakeshji offered me.

Q.: As a director it's your first film and Ajay Devgan also has directed his first film "U Me Aur Hum". Both the films will be released on the same day. How are you thinking about the competition?
A.: I cannot think about competing with Ajay because I have assisted in two films acted by him. I share good relation with him since a long time, and I wish to continue that forever. Actually I am a well-wisher of Ajay. Albeit I have not seen his film I can sense that he will prove himself as a good director. I wish him all the best. I pray to God to bless both of us.

Q.: Was there any reason that after "Judaai" in 1997 you took a long rest?
A.: In 1997 I worked in "Itihaas" also. And in the same year I joined Mukul S. Anand for his film "Dus". But due to his sudden death, the project got postponed for unknown period of time. Then I joined Sunny Deol at the end of 1997 for his film "Yeh Dillagi". I was the associate director in the film. It was released in 1999. And after a gap, I started working with Rakesh Roshan for his film "Kkoi Mil Gaya" in the year 2001. Starting with the 1990 film "Trinetra", I continued assisting Raj Kanwar till 1996 for six films, which include "Jaan", "Judaai", "Ladla", "Itihas", "Kartavya" and "Dus". The last film is incomplete. Besides all this I assisted Subhash Ghai for "Kisna", too.

Q.: You have worked with so many directors. Who inspired you most?
A.: I am a fan of late Mukul S. Anand. I especially like his films "Insaaf" and "Agni Path". But if you talk about experience, I would like to mention the working experience with Rakesh Roshan has been great. It cannot be compared with anyone else. It's a great achievement working with him. I will always be thankful to God for the opportunity I got.

Q.: Please tell us about your other projects.
A.: I will direct a film under Percept Pictures which I bagged because of Suresh Menon. He suggested my name to Sailendra Singh, the Managing Director of the company. We met and decided on the project.

Q.: Please tell us about the film.
A.: It's too early to talk about this film. I can only say that this will be a thriller because I am in no mood to make another comedy after "Krazzy 4".