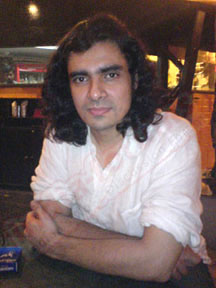 What made you decide on making "Jab We Met" after "Socha Na Tha"?
The script really worked for me. It's a very contemporary film. I'm very fascinated by the romanticism inherent in our lives and I have tried to depict that in "Jab We Met".

Tell us something about the film.
"Jab We Met" is a film about two strangers, completely opposite to each other in terms of temperament and behavior. The story is how they are thrown in each other's company in different situations that also take them to various places. It is a beautiful story about life, travel, and very young and fresh. It's a magical journey of two extremely different people who meet while traveling and how their lives unfold.

What made you sign Shahid Kapur and Kareena Kapoor for the film?
Well, since the film is about how two strangers meet and fall in love while traveling, I felt Shahid-Kareena were perfect to depict the situations. They are very steady and the bond looks evolved. They are well adjusted to each other. You can say mine is probably the first romantic film with Shahid and Kareena together.

How did you enter the film industry?
I hail from Jamshedpur . While in college in Delhi, I became quite involved in theatre. I came to Mumbai and
directed quite a few television shows before bagging the offer for my debut film.

"Jab We Met" has been shot at different locations across India. How was the experience?
I love traveling and "Jab We Met" really helped me fulfill my desire to visit different places. We visited places all over India such as Nabha, Punjab, Manali, Rajasthan, Mandava, Rohtang Pass, Khandala, Bhatinda and others. From sub-zero temperature places like Rohtang Pass to extremely hot places like Rajasthan, each was a fabulous experience. The film is an adventure covering some of the most beautiful places in India.

How was it working with Shahid and Kareena?
As actors they are completely different people. I never used the same style of explanation for both of them. Shahid likes detailed explanation beforehand. Kareena is impulsive and she doesn't need one extra word. It was fabulous to see both working together and unlike reports, neither Kareena nor Shahid had any hang-ups at all. In fact, Kareena threw no tantrums and was very chilled out.

Any memorable experience while shooting for the film?
We traveled to so many places in India, exotic far off places that we have memories attached to each of them. Saroj Khan choreographed a song with around 150 dancers from Tibet and Himachal Pradesh, we almost got bitten by fierce dogs in Punjab, I stayed at a scary haveli in Rajasthan for 20 days.… all fabulous experiences.

What are your future projects?
Well, none right now. But let's see if any interesting story comes by, who knows?