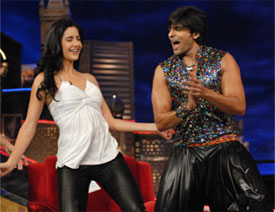 It's a star-studded Valentines Special episode this week on Oye.. It's Friday with the sizzling Katrina Kaif, Kailash Kher and of course, the first male performer on the show, Hussein Kuwajerwala gracing it.

According to our source, "As Katrina talked candidly about the controversies and link-ups surrounding her, Hussein, the first male to perform on the show burned the dance floor like never before!! He grooved on the hot and happening numbers of 2008, from 'Nagada', 'Jee Karda' to 'Dil Haara'".

Seeing Hussein's foot tapping performance, even Katrina could not hold herself but sway with him on 'Jee Karda'. "Katrina loved Hussein's dancing, and Farhan was also all praise for Hussein's fantastic dancing skills", adds our source.

Well, for all action, tune in to Oye…It's Friday's Valentines Special this February 13th, at 10:00 PM only on NDTV Imagine.

13 years ago he makes people dance... and katrina is not the kinda lady that sits while pple dance.. his energy is infectious! Hussain is superb... Damn, i dun get NDTV in Spore....

roshnimv 13 years ago Husein is a mind blowing dancer. He makes people sitting at their houses watching him on tv dance, obviously how could Katrina stop herself from dancing with him.

+ 3
13 years ago i loved hussain b4 but now its nt dat i dnt like him. he is nice but now m nt soo eager 2 watch him. i love him watching only wid juhi.

+ 3
13 years ago I always liked Hussain, for me.. he is Shah Rukh of Teleworld. Loved him do comedy in that comedy show also..