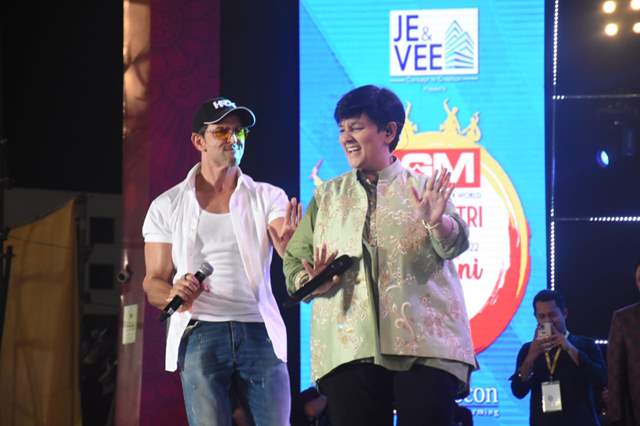 Bollywood actor Hrithik Roshan along with team Vikram Vedha celebrated the Navratri Maha saptami with Falguni Pathak at a garba night event in Mumbai. Hrithik along with Vikram Vedha writer-directors Pushkar & Gayatri, producer Shibasish Sarkar arrived at one of the biggest Navratri events in Mumbai as guests of honor.

Upon being called on stage, the War actor greeted the audience with a hearty, "Kasa Kai Mumbai? Kem cho, majja ma?" leaving the venue in a state of frenzy.

Greeting Falguni Pathak on stage, the Super 30 actor said, "Falguni ji main aapka bohot bada fan hoon. Kya aap mere saath 2 (garba) steps karengi?". The veteran singer was quick to suggest that she cannot match steps with Hrithik like his film songs. To which Hrithik requested her to lead and he will follow her along with the audience.

The garba night event turned into a night full of smiles for the audience who witnessed two legends on stage together, with the evergreen singer Falguni Pathak & India's most loved dancer Hrithik Roshan performed garba together.

Hrithik Roshan & Saif Ali Khan are seen promoting their film Vikram Vedha and have been leaving no stone unturned to express their love & gratitude to their audience. After hosting multiple fan events in Mumbai, Hrithik & Saif visited Delhi and Gurgaon last week.