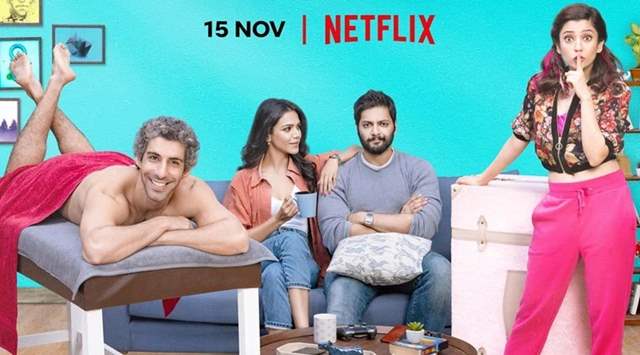 Imagine staying within the four walls of a luxurious apartment with all the amenities and ample supply of food, groceries and everyday things and all you have to do is stay at your home, away from the society and its issues. That’s exactly what happens in Netflix’ new original House Arrest. Directed by Samit Basu and Shashanka Ghosh the film stars Ali Fazal, Shriya Pilgaonkar, Jim Sarbh and Barkha SIngh in lead roles.

Karan (Ali Fazal) is a Hikikomori, a japenese word for a loner who stays put inside his own house to stay away from the societal issues, but unlike other Hikikomoris he doesn’t confine himself to social media and technology, rather learns new things to keep himself busy. Shockingly he hasn’t stepped outside of the house for around 279 days, which is roughly nine months. Shortly, we are introduced to his best friend JD (Jim Sarbh), his funnily dangerous neighbor Pinky (Barkha Singh) and a journalist named Saira (Shriya Pilgaonkar) who is sent at Karan’s house by JD. Saira is writing a story about Hikikomoris, while doing her research with Karan, they both get attracted to each other.

Some confusing and idoitic series of events happen and the story unfolds accordingly.

Ali Fazal as the protagonist of the film has acted well, as he does always, however he looks disinterested and so does Shriya Pilgaonkar who plays Saira. Audience loved their chemistry in Amazon Prime Video’s Mirzapur, but House Arrest seemed to be a little lack-lustre. Jim Sarbh and Barkha singh tried to give their best, but couldn’t save this shoddy film.

Screenplay is the weakest link of the film and because of that a fairly good concept fell short. The idea of the film is relatable and relevant but the treatment could have been better. We understand the makers were trying to go for subtlety but it looked at times it looks bit rushed as the time frame of the film is 24 hours, and at some points it looks dragged.

However, we loved the visual inserts of how the callers were made virtually present in Karan’s house while speaking.

The concept of the film is good and relevant, however the treatment could have been better. You can give it a watch if you’re a Hikikomori, if not, this one can be missed.

columbia 8 months ago Someone please send IF review writers to an English class. Subverting is not an adjective, it’s a participle of the verb subvert, your headline makes no sense. Seriously man! A reviewer who does not review her own content...amazing!

Disha Salian's Dance Video With Rashami, Gurmeet & Others 2 ...
5 minutes ago

Meet the On-screen Mother of Sana Sayyad in Star Plus' ...
47 minutes ago

Rhea's Lawyer Dismisses Her Being 'Missing' Allegations; ...
55 minutes ago