Bollywood actress Kangana Ranaut, who is here to shoot for a film, was harassed by a group of hooligans in the Kaiserbagh locality of the city.

Kangana is here with co-stars R. Madhavan and Jimi Shergil for the past 10 days to shoot for Anand L. Rai's 'Tanu weds Manu'. 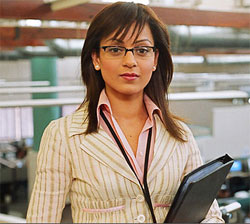 Featured Video
incident took place Sunday at the Lal Baradari building where the cast and crew were shooting a sequence for the film around 10 p.m. It was a holiday, so a huge crowd, over 2,000, gathered around the location.

'It was horrible. A group of youngsters came very close to Kangana, Madhavan and Jimi and started passing lewd comments about her. Some of them also tried to touch Kangana,' a crew member told IANS.

However, the police denied the allegations.

'Keeping in view the huge gathering, we had deployed entire force of about four police stations at the Lal Baradari. The director, however, complained that due to the crowd they were having problems in shooting as people were coming into the frames,' inspector K.M. Singh of Kaiserbagh police station told IANS.

No police complaint has been lodged.

'We will surely register an FIR if anyone from the crew approaches us with a formal complaint,' Singh said.

Rai, who had earlier directed the thriller 'Strangers' starring Jimi and Kay Kay Menon, is scheduled to film 'Tanu weds Manu' in Kanpur, Faridkot, Patiala and New Delhi in the coming days.