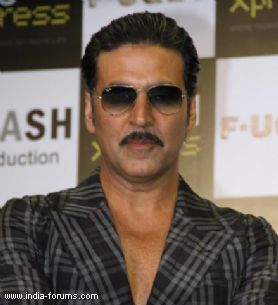 Actor Akshay Kumar, who is gearing up for the release of his new film "Holiday - A Soldier Is Never Off Duty", says he's more bothered about the people's reaction to the film than its box office performance.

"I'm not talking about the business, whether it ('Holiday...') will earn Rs.100 crore or Rs.50 crore...I'm more interested in how people take this film and how seriously they talk about the film."

The 46-year-old, who has worked in numerous Bollywood films, has given two Rs.100 crore blockbusters - "Housefull 2" and "Rowdy Rathore". But from "Holiday...", he expects that every person who watches it respects every person in uniform.

"It (the film) has lot of issues and causes for which every youngster, every Indian should watch it and understand," the actor, who plays a dedicated army officer, said.

"Holiday: A Soldier Is Never Off Duty", produced by Vipul Shah and directed by A.R. Murugadoss, features Sonakshi Sinha as the female lead.

Presented by Reliance Entertainment, it will hit the theatres Friday.