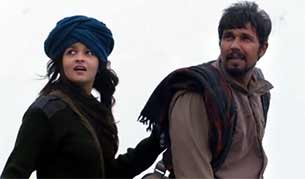 Alia Bhatt and Randeep Hooda-starrer "Highway" may not be a big grosser at the box office, but it is shinning brighter than Jimmy Sheirgill's "Darr@The Mall", say trade pundits

The Imtiaz Ali directorial has collected around Rs.15 crore in India, leaving "Darr @The Mall" far behind despite both films reportedly hitting around same number of screens i.e approximately 800 in the country Feb 21.

"'Darr@The Mall' is not doing well. It was around 20 percent in first three days and on Monday only 15 percent," he said.

It's not just the audiences, who were stunned by Alia's screen presence, megastar Amitabh Bachchan also praised the 20-year-old in his tweet.

"'HtohP'('Hasee Toh Phasee') and 'Highway' ... two films back to back and did not want to come away from them. Parineeti and Alia ... gems," Amitabh tweeted Sunday.

Actress Raima Sen was spellbound too by Alia's acting prowess in the film that also stars Randeep Hooda.