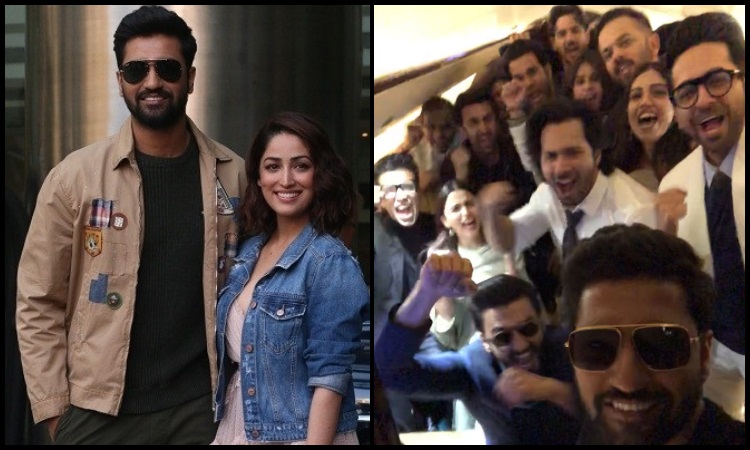 A day ahead of the film's release, Vicky Kaushal starrer URI gets a perfect shoutout from B-Town celebs.
Vicky Kaushal played a perfect commando to his B-Town friends as they were seen joining in the josh with the URI star.
Bollywood celebs like Karan Johar, Ranveer Singh, Ranbir Kapoor, Alia Bhatt, Rajkummar Rao, Ayushmann Khurrana, Ekta Kapoor, Siddharth Malhotra, Varun Dhawan, Bhumi Pednekar, Rohit Shetty were seen giving major shout out goals for Vicky Kaushal starrer URI.
Sharing the video, Vicky posted captioning, "From us to you! Releasing tomorrow. #URITheSurgicalStrike".
Vicky Kaushal starrer 'URI The Surgical Strike' is 2019 first content driven film all set to release on the 11th Jan.
The film URI The Surgical Strike is based on the 2016 Indian army's surgical strike on terrorist camps in Pakistan in retaliation for the terror attack on an Army camp in Uri in Jammu and Kashmir.
Bringing to screen one of the biggest events in the history of Indian Army, Aditya Dhar's directorial URI depicts the reality behind the surgical strike by Indian Army on Pakistan. 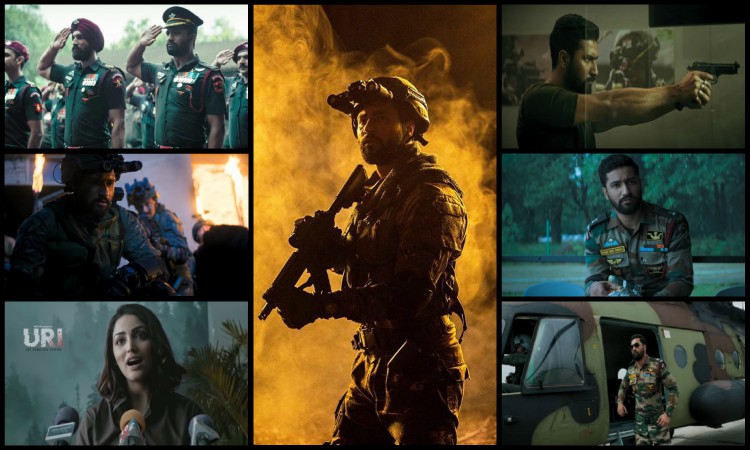 It's not every day you get to see a Hindi film showcase the feats of the Indian army with intricate details of the incident. The youth ever since the film announcement have been very eager to know about the research that went into the script and how the director spent six months fleshing our key moments in the script.
Showcasing the story of the night that shook the entire nation, the units and short promos released by the makers showcase the dangerous operation initiated by the Indian Army in retaliation of the terrorist attack by Pakistanis in URI which killed 19 Indian soldiers.
One of the most anticipated films of 2019, RSVP's URI has got everyone excited and charged up to see the story of Indian Army's Heroic triumph against the militant bases of Pakistan which also marks one of the most important events in the history of the Indian army.
Starring Vicky Kaushal in the lead role, URI is his first action-packed film which also boasts of an ensemble cast, including Mohit Raina, Paresh Rawal, Yami Gautam, and Kirti Kulhari amongst others.
0 Likes

Zool 1 years ago Vicky Kaushal and Yami Gautam's latest release URI is actually going to give you goosebumps... Check out the review on Lopscoop

You can download the Lopscoop App from Google Playstore.

Aamir Ali opens up on his upcoming series Naxalbari; says, ...
36 minutes ago

‘French Biriyani’ Director Reveals His Unique Technique and ...
42 minutes ago

Vir Das opens up on debuting in an unscripted homegrown ...
48 minutes ago

Janmashtami 2020: Urvashi Rautela wishes for good health and ...
57 minutes ago

Breaking
Breaking Saif and Kareena Confirm Pregnancy News in an Official ...
2 hours ago

Sehban and Reem reveal how they became friends on the sets ...
2 hours ago