Set in New York in the weeks before and after 9/11, the film stars Anupam Kher, Mahima Chaudhry, Suhasini Mulay, Vikram Chatwal, Ranjit Choudhary and Amit Sial.

The film about the romance between an aspiring Muslim photograp 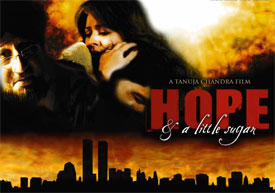 Featured Video
her and a young married Sikh woman is a high voltage emotional drama where religion becomes the root cause of every problem.

Despite Ali's secret and largely unrequited crush on Saloni, he develops a close friendship with her and her husband Harry (Vikram Chatwal). But their camaraderie gets a blow when terrorists attack the twin towers Sep 11, 2001.

Saloni's father-in-law, a retired army colonel (Anupam Kher), is devastated by grief and directs his longstanding animosity towards Muslims at Ali, as the young man's affections for Saloni grow increasingly evident.

However, the colonel's wife (Suhasini Mulay) bravely tries to pacify, but she fails to calm down her husband who threatens to bring everything to a violent end.

Director Chandra, who started her career with a hit thriller like 'Dushman', hasn't been able to please the box office lately. Her previous releases, 'Zindaggi Rocks' and 'Film Star', couldn't rock the box office.

She hopes to strike a chord with this emotional drama.