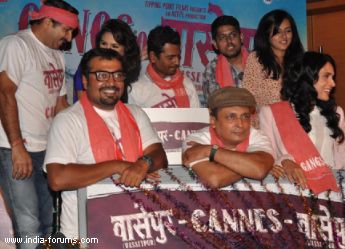 , is set to have its music launch in a unique way - on mobile.

Prior to the sound-track's release on the traditional CD, the album can first be heard on mobile phones thanks to a collaboration with telecom company Bharti Airtel and content provider Hungama Mobile.

The film's music, composed by Sneha Khanwalkar, will be exclusively available for Airtel mobile customers for 10 days, starting May 26, via Hello Tunes and Airtel Radio.

"The music premiere of 'Gangs of Wasseypur' first on the mobile platform speaks volumes of the changing consumption pattern among customers today," N. Rajaram, CMO, consumer business, Bharti Airtel, said in a statement.

"Be it music, movies, gaming, social networking or emailing - the discerning Indian customer is increasingly relying on the mobile phone for accessing content," he added.

The movie is slated to release June 22.

Kangana Ranaut is in Awe of Yogi Adityanath; Applauds his ...
10 minutes ago

Farhan Akhtar is excited to kick-off the opening match of ...
17 minutes ago

Arjun Bijlani on music video with Reem Shaikh: I feel Ishq ...
37 minutes ago