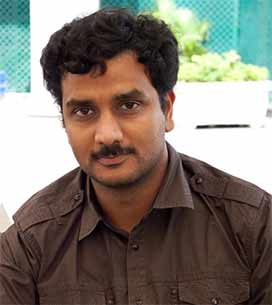 First time director Srinivas Avasarala is extremely happy with the response he has received for his recent Telugu romantic-drama "Oohalu Gusagusalade" and this has motivated him to make more films.

"Most low-budget films that are apparently good are only raved by critics but rarely by audiences as they look for entertainment factor and when that's not found, they discard a film. I'm happy that my film was liked by audiences and critics alike," Srinivas told IANS.

"The success has given me the confidence to innovate and make more films. I haven't started working on anything yet but I plan to start soon," he added.

Starring Naga Shourya and Raashi Khanna, the film in its opening weekend minted over Rs. 2 crore at the ticket window.

There was a lot of Woody Allen influence on "Oohalu Gusagusalade". Avasarala says it was his tribute to auteur.

"I'm a big Woody Allen film. I felt happy when people like the references to the legendary filmmaker in my film, which is a tribute to him. Woody has a lot on influence on my writing and that has apparently turned out to be my strength," he said.

Never seen before Bhoot in “Happy & Pinaki- The Bhoot Bandhus” on ...