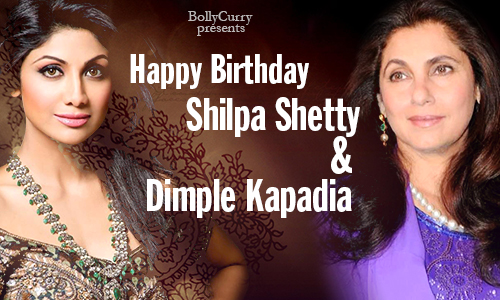 Two of Bollywood's most notable and popular names share their birthday today - Shilpa Shetty Kundra and Dimple Kapadia! BollCurry takes a look back at their memorable careers as we wish them a very happy birthday.


Shetty was born in the year 1975 in Chembur to Surendra and Sunanda Shetty. She began her career early at the age of sixteen by modelling for Limca, but it wasn't until 1993 that she received her career breakthrough with her debut release Baazigar, co-starring the popular couple of Shah Rukh Khan and Kajol Devgn. The film was a major success and earned her a Filmfare nomination for Best Supporting Actress. This thus marked a career of great highs as Shetty went on to portray an astonishing variety of roles in many acclaimed movies. Dhadkan (2000) and Rishtey (2002) were just two of her major successes. She delivered one of the best performances of her career in Phir Milenge (2004), in which she essayed the role of an AIDS patient. Shetty talent has also reached regional cinema having acted in a number of Telugu and Kannada films as well.

Below is a mini-playlist of some songs from the movies Shetty has starred in.
Dimple Chunnibhai Kapadia was born in 1957 to entrepreneur Chunnibhai Kapadia and Betty. She made her acting debut with Bobby (1973), but married the late Rajesh Khanna even before the release of the film. Bobby was a huge success, both critically and commercially, with the title role of Bobby Braganza earning her the Filmfare Award for Best Actress. After the success of the film, Kapadia took a break from the film industry to settle down in life with Rajesh Khanna and to mother her two children. She later returned to acting in 1982. One of Kapadia's major hits in the 1960s was the Ramesh Sippy directed Saagar (1985), which was chosen as India's official entry to the Oscars and won her a second Filmfare Award. She went on to star in many other critically acclaimed movies including several art-house films such as Rudaali (1993), Gardish (1993) and Dil Chahta Hai (2001).

Below is a mini playlist of some iconic songs from movies Kapadia starred in.
From all of us at BollyCurry, here's wishing both beautiful stars a very happy birthday and best wishes for all their future endeavors. We hope that their careers continue to shine.