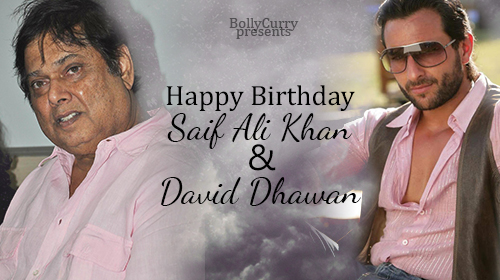 It is said that every birthday is an occasion to start anew. However, when life is going as good as Saif Ali Khan's and David Dhawan's with numerous successes under their belts and a legion of fans, birthdays turn out to be an occasion to contemplate the past and the present as well. As these two turn a year older, we reflect on their lives and their work and join in to celebrate with them.

Khan was born on 16 August, 1970 as Sajid Ali Khan to former Indian cricketer Mansoor Ali Khan Pataudi and actress Sharmila Tagore. Originally from Bhopal, he made his Bollywood debut in 1992 with Yash Chopra's Parampara and saw his first successes in 1994 with Main Khiladi Tu Anadi and Yeh Dillagi. However, he did not shoot to stardom until 2001 when he appeared in Farhan Akhtar's Dil Chahta Hai. After that, Khan went from hit to hit with a few misses in between, and branched out into film production in 2009 with his company Illuminati Films.

Not only is Khan a film actor and producer, but he is also a stage performer. He was married to actress Amrita Singh for thirteen years until they divorced in 2004 and has two children from the relationship. In 2012, Khan married actress Kareena Kapoor. He has been nominated for several awards over the years and has won quite a few as well, including the Filmfare Award for Best Supporting Actor in 2003 for Kal Ho Naa Ho and the National Film Award for Best Actor in 2004 for Salaam Namaste. The fans of Chotte Nawab are eagerly awaiting his next movies, which are expected to bring him even more accolades - Kabir Khan's Phantom and Vishal Bhardwaj's Rangoon.

Sharing the same birthday as Khan, albeit having been born fifteen years before, is the director of commercial super hits - David Dhawan. Born as Rajinder Dhawan in Jalandhar, Punjab in the year 1955, Dhawan initially joined the Film and Television Institute of India with dreams of acting. However, upon realising that he could not act as well as his peers and idols, he took up editing instead. He moved on from editing to directing, and his 1993 film Aankhen was a big hit. Dhawan has established himself as a leading force in directing comedy films. Among his most successful films are the Govinda - Karishma Kapoor starrer comedies Coolie No. 1 (1996) and Hero No. 1 (1998), Mujhse Shaadi Karogi (2000) starring Salman Khan, Akshay Kumar and Priyanka Chopra, Partner (2007) featuring Salman and Govinda and the latest being Main Tera Hero (2014) with his son Varun Dhawan in the lead.

Dhawan is married to Karuna Dhawan, formerly Karuna Chopra, and the couple has two sons, Rohit Dhawan and the latest heartthrob Varun Dhawan. His brother Anil is also an actor, as is his nephew Siddharth. While Dhawan has received multiple award nominations over the years, his first big win was the 2014 BIG Star Most Entertaining Comedy Film award for Main Tera Hero.

Let us celebrate this joyous occasion of two of the brightest stars in Bollywood today. We wish them a very happy birthday, and all the best in their future endeavours.