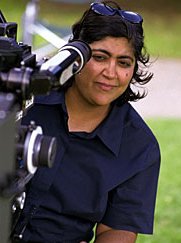 She has popularised India in the consciousness of western audiences through films like 'Bend It Like Beckham' and 'Bride And Prejudice' but Gurinder Chadha ironically admits she cannot speak Hindi.

Chadha, who is in Goa to attend a retrospective of her films at the 40th edition of the International Film festival of India (IFFI), said that she could speak Punjabi, but had not mastered Hindi yet.

Chadha further said she was working on yet another film set in the Asian-dominated Southall in London.

'Shabana Azmi plays the lead role as a typical Punjabi mother in it,' she said adding that the film was named 'It's a Wonderful Afterlife'.

Gurinder's films like 'Bhaji On The Beach', 'Bend it like Beckham' and 'Bride and Prejudice' will be featured in a special retrospective segment to be screened at IFFI, which began Monday and goes on till Dec 3.

Chadha said she was looking forward to the IFFI Goa.

'Yeah, it's a lovely venue here in Goa, and it feels nice. But I am more interested in how Indian audiences view what I do and how I do it... so yes, it's something I always look forward to,' she said.