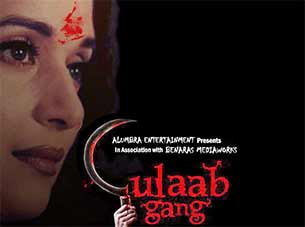 The first poster of "Gulaab Gang" came out Friday with Madhuri Dixit seen in the 'Kaali' avatar of goddess Durga. The fiery combination of red and yellow colours in the background adds to the curiosity about her role in the film.

In the movie, helmed by Soumik Sen, Madhuri, who has often played a demure girl-next-door in Bollywood films, takes on the role of a woman who leads a group of women vigilantes to fight against injustice in the Bundelkhand region.

"It's a very powerful character," the dancing diva had earlier said of her role, which also required her to shoot some daredevil action scenes.

The film's first look seems to justify it.

Sen took to Twitter to get a feedback on the poster, and wrote: "'Gulaab Gang'. The first poster. Hope you like it."