Well-known Bollywood producer Pahlaj Nihalani, who was instrumental in shaping actor Govinda's career with his first hit 'Ilzaam', says Salman Khan is currently ruling the comedy circuit and is the best comic actor.

'Though I have not worked with Salman till now, but I think in the industry today, he is the best actor as far as comic timing is concerned. He can play any kind of role but in comedy he is number one,' Nihalani, who has completed 30 years in the industry, told IANS. 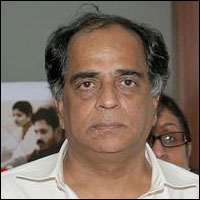 'My film 'Shola Aur Shabnam' was a trendsetter in comedy films. People did not like to watch comedy before that, but after that viewers don't like to watch anything besides comedy,' said Nihalani, who also produced blockbuster comedy 'Aankhen' in 1993.

'I always believe in introducing new talents as they do not have an image. Besides, I feel the country is brimming with talent and we as responsible producers should provide them a chance to prove their mettle.'

His next will be a sequel to the 1993 hit 'Aankhen' that will see most of the original cast. The producer said he is also planning to make a film based on the true story of Kandahar plane hijack in 1999.