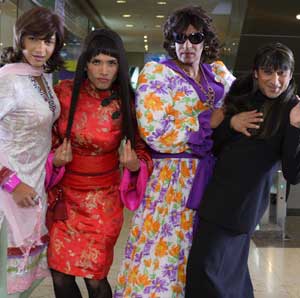 Golmaal Returns lads Ajay Devgan, Arshad Warsi, Tusshar Kapoor and Shreyas Talpade cross-dress on Director Rohit Shetty's call!!! There was a scene in the film that required the guy gang to dress up like women. And it happens to be a Women's day so they dress up like women to enter the mall, as only women were allowed to enter on that particular day. No wonder the guys got some strange looks from the women folk around, but then no complaining when you are the centre of attraction, right guys?


Rohit Shetty shares, "I was quite taken aback when Ajay (Devgan) agreed to this scene in particular. He was very gung-ho to go ahead with the scene!! Infact none of the guys had any reservations, which made it one of the best scenes in the film."


This one will surely grab the eyeballs to say the least!!!
Featured Video