Having already created a flutter with Aamir Khan's haircut and eight-pack abs, A.R. Murugadoss' action-thriller 'Ghajini' is all set to scorch the screens when it releases Thursday.

'Ghajini' is the Hindi remake of Murugadoss' award-winning 2005 Tamil hit by the same name. Aamir has teamed up with Asin, who was also in the original, in the much-awaited film. 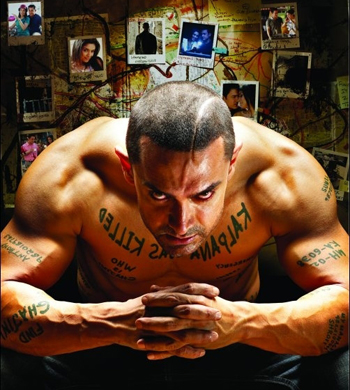 Featured Video
'Ghajini' is an action film, but it has a lot to do with human emotion. It's actually a beautiful love story. I hope the audience loves and enjoys the film. We have worked very hard for it,' said Aamir.

Aamir and his team painstakingly sculpted those eight-pack abs.

'It took Aamir 13 months of workout, with a daily regime of about four hours, to achieve the next-to-impossible look for 'Ghajini'. He used to get tired exercising and sometimes even used to shriek in pain and cry doing the stomach crunches, but he did not skip a single day. Every week his body used to show results and that kept him going,' said Satyajit 'Satya' Chaurasia, who trained the actor for the film.

The story revolves around Sanjay Singhania (Aamir), a rich businessman and the events surrounding his relationship with a model, Kalpana (Asin).

However, what is drawing the audiences to the theatre is the unusual plot according to which Kalpana is murdered by a goon and Sanjay is hit on the head by an iron rod when he tries to rescue his beloved.

Though Sanjay survives the blow, he suffers short-term memory loss. At any given time, he only remembers what happened in the last 15 minutes, though he has stark visions of Kalpana's murder.

The rest of the film is about how he teams up with a medical student Chitra (Jiah Khan) and goes about finding the goons responsible for Kalpana's murder.

Aamir's rigorous workout for 13 months in the gym to achieve the muscular look for 'Ghajini' and his buzzed hair look has already become a rage among audiences across the country.

'Ghajini' has a longer story to tell than is considered healthy for multilplexes. The action-thriller's playing time of three hours makes it the second-longest film of the year after 'Jodhaa-Akbar'. But the producer is unperturbed.

'It's not the length. It's the performance. You could have a really boring two-hour film. On the other hand you could've a really gripping film that's three hours long,' said Madhu Mantena, who also co-produced the super hit Tamil version of 'Ghajini' with Alu Arvind.