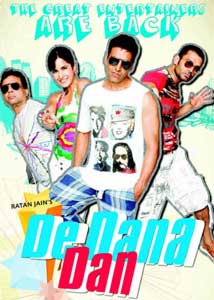 Bollywood actress Katrina Kaif is down with jaundice and missing from the promotions for her latest outing 'De Dana Dan'. And her co-star Akshay Kumar was prompt in wishing her speedy recovery.

Rumours were rife that the actress was rushed to Lilavati Hospital in Mumbai Monday night, where she was diagnosed with jaundice and has been advised complete bed rest for a while.

Asked if it were true, Akshay said: 'Katrina is down with jaundice... We are missing her and hope she gets well soon.'

Apparently 'De Dana Dan' is Akshay and Katrina's sixth outing together after movies like 'Hum Ko Deewana Kar Gaye' and back to back hits like 'Namastey London', 'Welcome' and 'Singh Is Kinng'. They also starred recently in underwater thriller 'Blue'.

Akshay, who has had a string of flops this year with 'Chandni Chowk To China', '8x10 Tasveer', 'Kambakkht Ishq' and 'Blue', is now keeping his fingers crossed for 'De Dana Dan'.

'Our chemistry does work and we've seen the results in 'Singh Is Kinng' and other films and we expect the same from this film too. This movie should do very well and I expect great returns for my producers. I have great expectations from this one,' he said.

Akshay was here at the DT Cinema multiplex in Vasant Kunj to promote the movie with his co-stars Suniel Shetty, Neha Dhupia, Sameera Reddy and producer Sunil. A. Lulla.

Directed by Priyadarshan, 'De Dana Dan' has also been produced by Ganesh and Girish Jain. It also stars Paresh Rawal in an important role.