The much-awaited Final of Jhalak Dikhhla Jaa-Dancing with the Stars is finally here after 14 grueling weeks of hard work by the contestants. The top three contestants in the finals are Sandhya Mridul and Javed, Prachi Desai and Deepak and Jay Bhanushali and Bindi and now all three are ready to prove why they should be the winner. 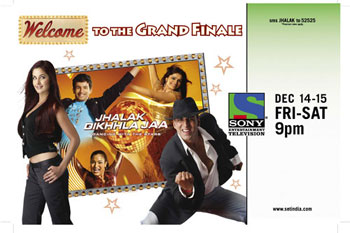 Featured Video
Friday will be the last day for the three contestants to perform and they are made to face some real acid tests to prove their dancing skills. In the first round, the judges have challenged each contestant to do what they have never done on the show before, so you have Shiamak's challenge to Sandhya to attempt a mujra while Jay turns into 'Jaya' (woman) given by the ravishing Urmila, and Jeetuji's challenge to Prachi is to dance on item numbers.

In the second round, all finalists prove their worth without their choreographers and then the three finalists perform together.

To grace the special occasion on Friday the special guest is the beautiful Katrina Kaif. She has a challenge for the finalists. They all have to perform the same two songs of her choice: they being Jhooth bole kauva kaate… and Jaane jaan you are my love… All three make sure to give full justice to the performance. The judges have given their verdict. But much depends on who will be the people's choice as the winner?

But this is not the end. There's more in store on Saturday on the Grand Finale. All the participants of Jhalak Dikhhla Jaa will make a grand comeback to the stage that made them household names. It is the Day of the Judgment - Saturday, December 15, 9.00 p.m. The crowning moment will come from the special guest of the evening, Akshay Kumar and Katrina Kaif, who will soon be seen in the film Welcome.

The dance floor is dazzling with colorful lights, there's music in the air, and anticipation and expectations take over as the curtain goes up to the Grand finale. Jeetendra, Urmila Matondkar & Shiamak Davar, the erstwhile judges’ dance their way onto the glittering stage. The three finalists each take turn to showcase their best. For the finalists, there's solo dancing, dancing with their choreographers, dancing with judges, while the other highlights will be some electrifying performances by Tapur Chaterji, Cyrus, Rohit & Mona.

If this is not grand enough, you got to watch Jeetendra rocking with the three beauties, Sudha Chandran, Mini Mathur & Sonali Kulkarni; Urmila's sizzling performance will leave the viewers breathless and icing on the cake is Shiamak Davar on stage doing what he loves best dancing with the bevy of beauties like Mini, Tapur, Sandhya. There’s more - Watch the 12 choreographers when they take the stage together to give one of the most electrifying performances of the evening. Amidst great dancing, rigorous voting and in company of glittering stars, the Jhalak Dikhhla Jaa—Dancing with the Stars winner will be declared.

Commenting on the show, Albert Almeida, Executive Vice President and Business Head, Sony Entertainment Television, said "The second season of Jhalak Dikhhla Jaa-Dancing with the Stars has witnessed a higher level of audience interactivity and enthusiasm from the celebrity contestants. The season also presented a 'galaxy' of Bollywood stars shaking a leg with the contestants that further raised the bar for viewer involvement. For the first time, the show introduced a 'wild card entry' on public demand. We are now reaching the peak of this successful show with our Grand Finale plans that will complete the glamour & glitter quotient of Jhalak with Akshay Kumar & Katrina Kaif crowing the winner".

So do not miss the final performances of the top three on Jhalak Dikhhla Jaa – Dancing with the Stars on Friday December 14, at 9.00 p.m and the Grand Finale on Saturday December 15th, at 9p.m only on Sony Entertainment Television.

14 years ago hahahhahahaha i don know wat to say.:$

i want her to win!