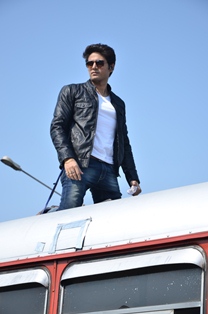 The senior cops of CID, Daya (Dayanand Shetty) and Abhijeet (Aditya Srivastava) are known for their bravery and the stunt filled action scenes that they attempt. But now the action will get more entertaining and engaging with television's two handsome hunks Gaurav Khanna and Maninder Singh joining the team.

Gaurav and Maninder will be seen portraying the role of senior CID cops Kevin and Dushyant respectively. Sources from the sets have informed us that in his first episode Gaurav will be seen doing a dhamakedaar entry on top of a moving bus.

Commenting on his association with CID Gaurav says, "I am very glad and elated to be the part of CID which is running from last 17 years. I am a regular viewer of CID and was very happy when Mr. B. P. Singh offered me the role of senior cop Kevin. I hope audiences appreciate my character like they have being appreciating the show."

The introductory episode will see Gaurav Khanna positioned on top of a moving bus chasing the criminals. This thrilling sequence will have everyone's adrenaline pumping.

shails_rocks2da 6 years ago the dashing guy of the whole cid team is none other than gaurav kahnna himself. really appreciate his work in cid. hope you go along way buddy. you are the rock star of the cid team.

tazrianmalhotra 6 years ago Gaurav I love you... and I really want to see you... I am planning to come to Mumbai soon.

harithas 6 years ago I don't know you until you came into CID. From the first time I saw you in CID, I read and saw a lot of news about you and began to like a lot Gaurav! Your entry is awesome Gaurav!

+ 5
7 years ago Gaurav Khanna is awesome in CID! Thanks for the article! :)

+ 4
7 years ago welcome back Gaurav Khanna...
You got the much deserved role after a series of similar roles..

7 years ago luved ur entry. hope to see u in next episode.

7 years ago from witch episode is he entering the show?

7 years ago so happy to see gaurav and maninder in cid.
o'n sure they'll rock with he rest of the amazing cast.

Gourav.Star.5 7 years ago I have a dream to join cid tv show I am preparing for be an actor soon I'll be there

7 years ago Welcome back , missed u lot and will be thrilled to see you in action.