She won over the hearts of all as the charming and ambitious young girl, Ruchi in NDTV Imagine's show, Radha Ki Betiyaan Kuch Kar Dikhayengi. And now, Ratan Rajput is seen in an altogether new avtar speaking the Bihari dialect to the 'T' in Zee's new show of Swastik Pictures, Agle Janam Mohe Bitiya Hi Kijo..

Here is the girl talking about her role and much more to Telly Buzz.. 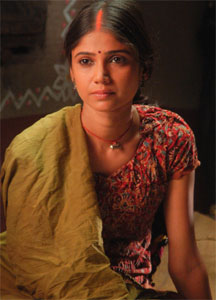 Featured Video
How did you bag the role of Lali in Agle Janam…?
Radha Ki Betiyaan was getting over and I had few offers in hand. I got a call from Vikas, from Swastik Pictures and he wanted to meet me. The shooting schedule of my previous show was little hectic as it was coming to an end, so I did not have enough time to meet them. However, when I asked him about the background of the show, he said it's Bihar. The moment I heard that it clicked as I am from Patna. After Radha Ki Betiyaan, I went for the audition and was immediately selected for the leading role. It was really a coincidence and everything happened so very fast.

Can you elaborate about you character in the show?
Laali is totally the opposite of Ratan. She is very simple and the happy go lucky kind of girl. Laali is the spinal chord of her family and wants to know the right and wrong. She always supports the one who is right.

It's heard that the whole cast is facing lots of difficulties while shooting in Wahi?
Well, we are shooting in a village. We are always under the hot sun, without even our slippers on, and these are the kinds of problems we are facing, but its fine. I was informed about the situation earlier by the producers, so I am well prepared. I am very thin so they had warned me before, but I wanted to do the show. The first three days were very painful, but now I'm used to all this.

The show has garnered very good TRPs ever since launch. What have you to say?
Here, I have to say that whatever hardships we are facing while shooting has paid off when we see the success we have got. These kinds of problems seem to be very small in front of the recognition that I am getting from the show. We all are really working hard to better our numbers.

As you are playing the lead here, do you feel there is lots of responsibility on your shoulders?
I feel responsibility is there, but not totally on me. My director carries more responsibilities on his shoulders. We all are aware about our scenes and try to carry that in the best way possible. Everyone is supporting me and I am also aware of how much we need to work around the clock. This is the reason I don't ask for any holiday from the crew of the show. I'm really feeling good as everyone is so co-operative.

Tell us about your relation with your co-stars?
They all are very nice and helpful. I call Adityaji Babu as it is his character name in the show. He is very caring and always brings bhel from the market for me, whenever he goes out. He tells me to eat that bhel secretly or else I would not get a chance to have. Besides that, I call my little brother Munna. I'm very much attached to him. Others are also good starting from the star cast to the crew members.

Where do you see yourself five years down the lane?
I see myself doing good work. Also I wish that I be the same way as I am today with no tantrums and no attitude. For me zero is very much valuable and this keeps me away from all the bad things. After Radha Ki Betiyaan, I started again as a zero in the show Agle Janam Mohe Bitiya Hi Kijo.

13 years ago i love her humility. She is a beautiful actor and the show is going on very well.

+ 8
13 years ago Agle Janam is a beautiful show, and the entire star cast is doing a great job!

+ 2
13 years ago happy for them that the show is doing good! all the best and she is realy sweet!

+ 2
13 years ago yes..zero does hav no value..but u try to understandthe depth about wat she said..
one hu speaks..such things...hav no proudness..
they no hu they..are...

+ 2
13 years ago hmm she seems very down to earth.....luv her attitude....she will surely reach heights