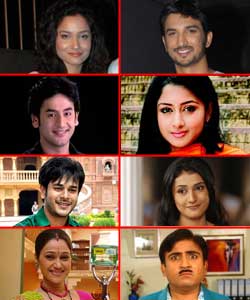 The buzz is that the viewers of SAB TV's Papad Pol will soon be in for some major surprise with certain popular Jodis of television gracing the show.

A source informs, "The production house is planning to bring in some added interest in the form of these celebrities to get a good run with ratings. The plan is to bring in 5 such Jodis from small screen. Jodis like Manav-Archana from Zee TV's Pavitra Rishta, Jagya-Gauri from Colors TV's Balika Vadhu, Suhana- Ishaan from Star Plus' Sasural Genda Phool, Daya (Disha Wakani)-Jetha (Dilip Joshi) from SAB TV's Taarak Mehta Ka Ooltah Chashmah are few of the Jodis approached for the show till now".

Talking about the track in Papad Pol a source says, "The show will see a competition between few Pols and each competition will be judged by these favorite Jodis".

An insider informs us about the shoot that took place yesterday where Shashank Vyas (Jagya) and Anjum Farooqi aka Gauri of Balika Vadhu shot for an episode.

Our source says,"They were the first celebrity couple who graced the sets. However, there seems to be a problem in the airing of their episode, as Colors has objected to their actors participating in the show. Accordingly, the episode shot with Jagya and Gauri will be scrapped and the same will be re-shot with another Jodi".

We too hear that the next pair to shoot for the show would be Archana and Manav.

We contacted Shashank Vyas and he says, "I am not in the state to comment anything right now".

While Ragini and Jay said, "We are approached but we don't think we would be able to make it due to date problems".

Sushant Singh Rajput remained unavailable for his comment,  while Ankita seemed clueless about the development.

Let's wait to see which of the popular Jodis makes it to the sets of the SAB TV show..

+ 4
9 years ago Love u loads Ankita.. have a great day ahead

+ 4
9 years ago u look absolutely gorgeous in the SA pics and even in ore piya dance Ankita.

I just love to watch u dance..

9 years ago Hey Ankita, PR needs to end. It has no relatable storyline.

I wish you success and happiness in the long run. Freaking fed up with PR.

Love ya always. Peace out with disgust!!!!

9 years ago
You are pretty Ankita. I hope PR does not end soon. They could find better stories.