View Profile
Its celebration time on Rajan Shahi's Yeh Rishta Kya Kehlata Hai as Akshara's brother Shaurya is getting married to her best friend Varsha in the coming episodes. The wedding takes place in a simple manner and all is set for the suhaag raat sequence. 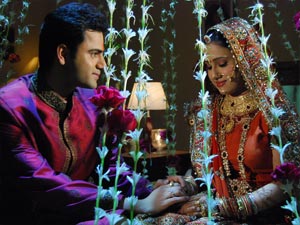 
"The wedding has been kept simple and sweet as Varsha's mother is a widow. Though we have not told anything like that, but there is a scene where the bride's mother say, hope all preparations are done properly. In reply, Varsha's mother in law states that we just want your daughter and there is no need of anything else," says Rajita Sharma, Creative Director of the show.

Talking about the suhagrat scene she adds, "We have kept it simple where the bride and groom are rediscovering themselves as man and wife. This is what we wanted to say in this particular scene and it has come out well."

We called up Pooja Joshi aka Varsha to know more about the scene. "It was very decent and a clean scene where the bride and groom talk about what they expect from each other. We were not uncomfortable at all. Initially I was nervous, but at the end I'm thankful to my writer Rajita for making it simple", quips the actress.

When asked where the duo head for honeymoon, "Well there is no honey moon in the show for us. Now that I'm the badi bahu of the house, there are responsibilities that I have to carry on and this is where the story focusses right now," she adds further.

Rajita also talks about some rituals that will catch the attention of viewers in the coming time. "After marriage there is a ritual where the bride comes to her new home and in front of her some thali's are placed. Now she has to pick the thali without making any noise. If she is successful she will be blessed."

"Every member of the house teases the newly married couple. They pull the leg of Shaurya by saying that if his bride is not successful in this particular ritual then he has to listen to the consequences all through his life," she quips.

The show has been doing well since it started. Let's see whether it is able to hold the attention of janta in future too.

kashfiya 13 years ago thankk GOD ...the first night is so clean...& its also not compulsory 4 all 2 doo every thing in first night...thanxx writer sir.. :D

would be w8ing for this