View Profile
While everyone else is busy celebrating and welcoming 2012 with arms wide open, here's a small gift from BollyCurry on this auspicious occasion! We bring to you the very first and very awaited first look of Akshay Kumar and Sonakshi Sinha starrer, Rowdy Rathore! 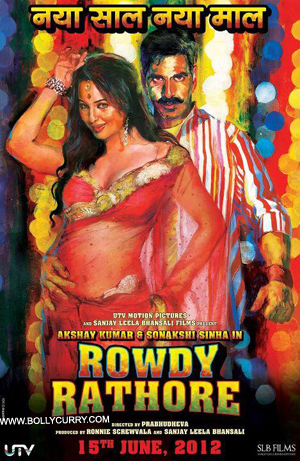 What is unique about this poster is that it is not merely a still containing the lead pair of the film or bearing film's name in any kind of animated matter, and no, it's not digital either as was Salman Khan's Ek tha Tiger. Instead, it is a hand-painted portrait of film's main characters essayed by Akshay and Sonakshi, with film's initial details printed thereafter.
According to the sources, four different street painters were hired for designing film's theatrical poster, all of which presented diverse versions, which will be revealed in due measure of time; and Akshay and Sonakshi had to stand still for almost four long hours, to get the poster done perfectly!
Directed by Prabhudeva of Wanted fame and produced by Ronnie Screwvala and Sanjay Leela Bhansali, Rowdy Rathore is going to be a high octane action film where Akshay Kumar is set to play a double role. See for yourself, the artistic first look at this much anticipated poster!