Finally the curtains are up on the contestant list of 9X' Jalwa 4 2 ka 1 right here on Telly Buzz. The format of the show includes acting, singing and comedy. 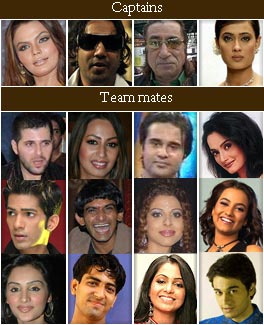 There will be four Teams and each will have its respective captains and members.

Rakhi Sawant, Mika, Shakti Kapoor and Shweta Tiwari are the captains in the show. The teams consist of members as follows:-

Rakhi's brother on their mother having a tumor in her abdomen

Bigg Boss 14 synopsis: Rakhi Sawant gets emotional as her mother ...

JasminBhasinFan 12 years ago wish all the very best to Shubhangi!!!!!!!!

babii.girl 12 years ago im with rakhi's team.. i like der team

Priya_SD 12 years ago kewl
im only watching becuz divyanka is hosting ho show...if only sharad was hosting with her