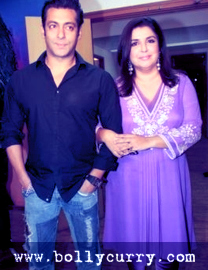 g queen, Farah Khan has supposedly joined hands with Salman Khan for her next project. What's even more surprising is that there is a possible chance the film will be jointly produced by both.
Lately, Farah and Sallu have been seen more in each other's company together than before. Although their friendship goes long back, it's only from the past few months that the bonding has visibly reestablished its status quo.
While detailing for her next project still needs much work, the script that Farah has been working on is part way done. However, the dedicated director that she is, Farah doesn't want to think about casting anyone till at least the script is whole and sound.
Will Farah and Salman unite for a film? Is this a simple revival of friendship, or the greater bonding over a common foe (read SRK)? Speculations rife, indeed!