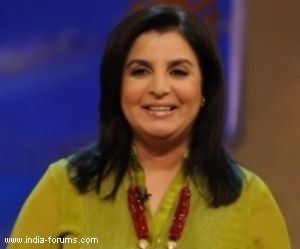 Filmmaker Farah Khan is going out of her way, literally, to promote her home production "Joker" in a unique way. She wants to make it possible for Indian-American astronaut Sunita Williams to watch the movie, based on aliens, while in space.

The "Joker" team seems too ambitious about it.

"We are trying to (show the movie to Williams), but I don't think we are going to get permission. There are lot of red tapes involved in that. UTV has been trying to get it up because the movie is about UFOs and space," Farah said here.

"They wanted it to be up there, but I think one has to take permission a year in advance. So the process is on," she added.

According to Farah, whose husband Shirish Kunder has directed the Akshay Kumar and Sonakshi Sinha-starrer, the team is in talks with officials of the National Aeronautics and Space Administration (NASA) to see if it can be made possible for Williams to watch the film.

Williams is currently on her second space odyssey to the International Space Station.