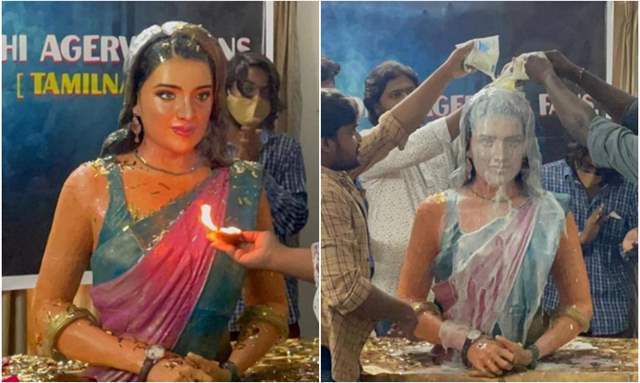 Actress Nidhhi Agerwal was taken aback by a sweet surprise as her fans in Chennai built a temple in her name. Fans unveiled a statue of the actress on the occasion of Valentine’s Day, on February 14, 2021.

On Sunday, fans of Nidhhi conducted a special puja and even worshipped her idol by showering flowers and milk on the statue. Pictures of the same have gone viral on the Internet.

Reacting to the same, Nidhhi told Times of India that this was Valentines Day gift for her from al her fans.

The actress is just a few films old down South and has done only two films in Tamil. She expresses that she is shocked to see such a grand gesture for her as she says, “I am still so new. I’ve done just two films in Tamil, a few in Telugu and I’m shooting for a couple of them in both the languages now. So yes, it’s shocking, but I am also overwhelmed. I didn’t know my fans would go to this extent and do something like this.”

She also added that she does not even have a formal fans association but she interacts with them on social media.

Previously, fans have built temples for several Tamil stars such as MGR, Khushbhu Sundar, Hansika Motwani and Nayanthara among others.

Meanwhile on the work front, Nidhhi will soon be starting the shooting for her upcoming Telugu film with Pawan Kalyan.

2 months ago @piya2025 Even I don't get what is wrong with those morons. And how could Nidhi be okay with this?! Either she is also deranged or she is scared of backlash and is just pretending to be cool with this due to fear of angering her fans.

2 months ago @pyar‐ishk Maybe some of these fans are psycho. If she would have said honestly that is not cool, those so-called fans maybe would have made her life miserable by stalking her, making threatening calls etc.

+ 2
2 months ago This more then creepy, and this can also cause trouble in her life, cause now it belongs to these fanatics. I don't think the actress had a choice but to say she's ok, imagine what they could do or say to her if she was against it.

+ 3
2 months ago This is not sweet. It's creepy. We aren't God/Goddess, we are mere human. Idolizing is still 1 thing but worshipping like this!! What's wrong with people & how does she feel okay with it.

2 months ago How stupid are these people abusing religious rituals for their favorite actress?!

2 months ago Seriously WTF is wrong with these people?