Here's Rajita Sharma who speaks on her journey from being a writer to a producer, on the concept of the show, on the star cast and much more… 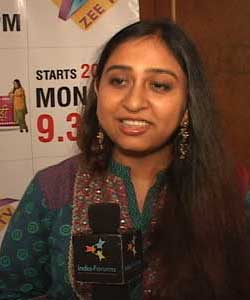 How did the concept of the show come to you?
The concept of the show was given to me by the creative team of Zee TV. We together developed it.
And the story is about two people a guy and a girl who have been born and brought up in two different religious backdrops. The Punjabi family is more extrovert and happy go lucky types where as the Gujrati family is a bit more conservative.

So it's the family upbringing that sets these two main characters apart from each other.

You were earlier associated with Ye Rishta on Star Plus. Now this show has also got a same time slot on Zee TV so do see any kind of competition?
I think every person should try to outsmart or cross his own limitation to achieve success. So I would say I'm not confident that I'll succeed in doing so but I'll surely try my level best for the same.

You are a writer turned producer so how has been your journey in the industry?
The journey has been very nice and the industry has taught me a lot of things. I was quite immature and very aspirant when I entered the industry so it has taught me to be tolerant, respect others opinions. And most importantly it has made me realized that in this industry there is so much to learn that you will always be a student and the day one stops learning it will be the end of one's success.

And when I was a writer I wasn't that creatively satisfied so my main aim reason behind turning as a producer was to have the freedom to portray my ideas the way I conceived them without compromising much.

So are there any added advantages of being a writer as well as a producer?
I would say there are advantages as well as disadvantages. Advantage is that now I don't feel creatively tied up in any way. I try to get every possible thing to make the sequence look perfect but as producer while fulfilling those demands I get financially drenched (smiles).

But finally we want to acquire fame and recognition through this show and so monitory profit becomes secondary. Personally I feel fame, money and glamor should be the byproducts of a work and doing what one feels with honesty is what should be the priority.

The idea behind such a huge star cast?
Firstly we made a simple character sketch on a canvas and then we began to hunt for actors and see which actors would suit and do complete justice to the given character. And the interesting thing that happened during the entire process was that many actors added their own inputs and charm to the characters so I would say it has been a very collective effort.

Tell us how you found a fresh face for your female lead?
How did we find her is a long story but instead I would we just found her somehow (smiles). When we auditioned her we realized that a lot needs to be worked out on her yes but she had this certain charm and she came across as a very a hard working, dedicated and focused kind of a girl. This is unseen in many girls at this age. So considering these qualities I feel she could be a very good actress in future.

With a series of family drama being televised what according to you is the TV of today?
I think TV has been evolving over the years. Also the reason being that through our shows we enter into the living rooms and bed rooms of our audience that in a way gets us closer to them. So we can't get stagnant at any point of time we have to keep on changing in fact we have to keep re inventing ourselves within a show also that too is equally important.

So this entire process of evolving is very dynamic.

As reality shows have a charm of their own so what kind of competitions are you expecting from them?
Yes we do have a very tough competition and I too have no clue about the TRP rankings (smiles). I think we can just make a nice show and present it well.

We also have the information that this show has grey shaded characters but there isn't a single role that is completely negative how true this is?
Yes it is completely true. Because as I said earlier that this story is close to a layman's life and in our day to day life we don't come across negative people; certain situations or circumstances develop little stubbornness or rudeness. But from within all are equally vulnerable. So we want to portray every one as a complete character in every form.

Don't you think negative characters add a little hype to the story?
No I feel characters are developed as per the requirement of the plot. Certain shows demand loud and negative element are show didn't require it. Because are base characters have all the potential and dynamism to take the story forward.

How is the experience working with Zee TV?
This is my first project with Zee TV and the experience has been very good. The entire team is no working as a channel and a production house but everyone's final aim is to give out a nice product.

Lastly any message before the show goes on air?
I would just request the viewers to watch it, sample it and then you decide whether you like it or not. I would take all your suggestions and feed backs always with an open mind.

malwica2 10 years ago its a replica of yeh pyar na hoga kam......not interesting at all rather non impressive!!!

yipee 10 years ago very honest interview...all the best to the show

Stellar.A 10 years ago what she says abt the female lead is true...she needs tgo work on her dialogues a bit.

_Divya_ 10 years ago may this serila do good

Shaina_b 10 years ago Yeh Rishta kya kehlata hai is the silliest show ever made!!!!

As for Ram milayi jodi, if the girl is a tomboy isn't she better off in jeans and tops??Or is it the demand of Indian Television that irrespective of character all heroines don a salwer before marriage and a saree after one??

Gur.N.cool 10 years ago it's a very nice show, the concept looks great so far. just need to polish up the acting

manasi_31 10 years ago honest answers!
seems interesting! will give it a watch!

Mandana Karimi and Radhika Apte come out in support of ...
53 minutes ago