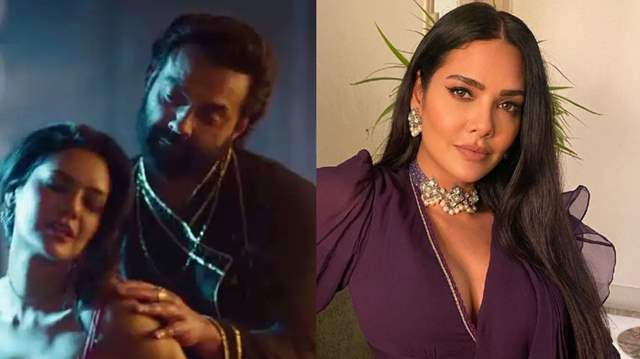 Former Miss India Esha Gupta will be seen in Prakash Jha's online series Aashram 3 sharing space with Bobby Deol for the first time. The actress opened up about her experience of shooting intimate moments with the actor. While Esha stated that closeness was not an issue for her, she does hope that whatever moments she and Bobby shot together can be justified.

When Esha was questioned if she felt comfortable shooting sensual sequences with Bobby in an exclusive interview with Bollywood Life, she remarked,

"There's nothing about being comfortable or uncomfortable when you have worked for like 10 years in the industry. People think intimacy is a problem but it's not, unless and until it's a problem in your real life. We are very open about it. The only thing is every scene is difficult, whether you're crying or driving on-screen."

Esha further expressed that, perhaps it was tough for her to shoot intimate scenes the first time she did it. However, when you're filming with mature individuals and a good actor, you won't have any issues. And being a part of this industry, it has been happening quite often. As a result, she doesn't believe it has to do with closeness. It's only a matter of whether one is happy with it or not.

Esha is a recent addition in Aashram's latest season. She will portray the part of Sonia, an image builder who will be seen enticing Baba Nirala for her secret reasons. Sonia knows what she desires and will find a way to have it, according to Esha, who spoke about her daring, seductive, and grey persona.