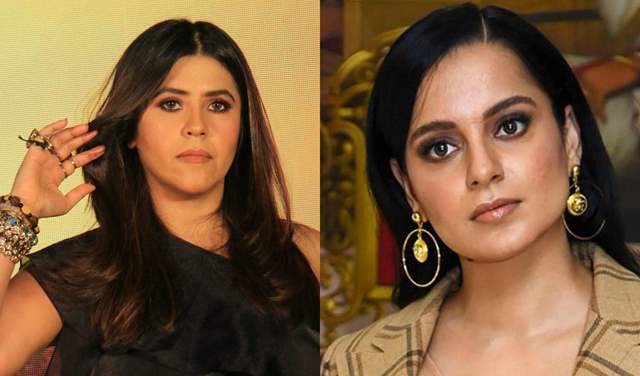 Ekta Kapoor is known for speaking her mind. The content czarina neither backs off when it comes to calling a spade a spade and nor does she shy away from showering words of praises on the people she feels are deserving.

Something similar happened when she watched Kangana Ranaut's recently released movie, Thalaivii. The producer- filmmaker was so taken aback by Kangana's performance that she not only praised her but also penned down a lengthy note appreciating the actress for her hard work.

Last night Ekta watched Thalaivii and after watching the movie she is all praises for Padmashree and 4 times National award winning actress Kangana Ranaut.

Taking to her social media account, Ekta shared a photo of Kangana from Thalaivii and wrote alongside:

"This is a post that’s coming out of an overwhelmed me. Saw Thalaivii last night and am stunned by the magnitude of scale, perfection, the detailing and the nuanced performances.

Director Vijay has brought out the best in every chatacter. Arvind Swamy, Raj Arjun, Madhoo have excelled in their performances. The wizard of words Rajat Arora delivers a clap trap. The perfect ode to Jaya Lalitha.

A league of her own Kangana is probably one of the few actors who not only gets into the skin of the character but takes the effort to physically transform herself with every role she plays. At no point do you feel this is not Jaya herself.

Kangna has perfected every aspect of the era from the physical appearance, voice modulation, to feeling the humiliation that Jaya Lalitha felt and striking back. Kangna makes this film probably one of the most watchable experiences of the year. So happy my friend to know an actor like you.

Thalaivii is a must watch !!!"

Touching upon the varied aspects of Jayalalithaa's life, Thalaivii presents her journey as an actress, from a young age to emerging as the Face of Tamil Cinema along with progressing towards the later phase of her life showcasing the rise of the revolutionary leader that shaped the course of Tamil Nadu Politics.

Scaling over 30 years of journey, Thalaivii presents Kangana Ranaut aptly portraying the different looks of Jayalalithaa throughout her life, in a gripping story that reflects the untold reality, backed by impactful performances and entertaining music.

Thalaivii, directed by AL Vijay and presented by Vibri Motion pictures, Karma Media Entertainment and Zee Studios in association with Gothic Entertainment and Sprint films has been produced by Vishnu Vardhan Induri and Shailesh R Singh and Co produced by Hitesh Thakkar and Thirumal Reddy with Brinda Prasad as the Creative Producer.

Thalaivii released in theatres worldwide in Hindi, Tamil and Telegu by Zee Studios on 10th September, 2021.

+ 2
a day ago It was Aravind swamy's show kangana was not even average one of her 1st performances, the camera never focused on her when she is mouthing Tamil lines 🤭 so much hype for being able to nail any and every role

+ 7
a day ago After Madrasapattinam and Deiva Thirumagal it seems like A.L. Vijay is finally back with a masterpiece movie. Yet to watch this one though.