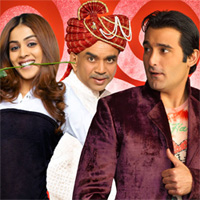 Mere Baap Pehle Aap is a typical Priyadarshan film. There is no concrete storyline. It is flimsy in all aspects. The film moves around Akshay (Gaurav), Paresh Rawal (Janardhan Rane, Gauravï¿½s father) and Om Puri (Madhar Mathur) and how Gaurav gets his ï¿½Baapuï¿½ married off to his 'old' love...

The film, Mere Baap Pehle Aap, starts off like a B-Grade film with a bikini-clad Mumait Khan soaking in the sun and sand, in the company of a dozen other equally under-dressed nymphs providing drool material for a lustful Om Puri and his tacky wig. It's like the makers decided to pack in as much forced hotness possible, in the first five minutes of the movie itself.

In its next twenty minutes Madhav Mathur, 50 years old man, is desperately searching for a girl to get married and convince his dough-kneading best buddy, Janardhan, to help him in this matter. Predictably, the mission goes on and they get in trouble with She-Cop, ACP Bhawani Bhagwat (Archana Puran Singh), over n over again and Gaurav comes to the rescue. The worst thing in the movie is that the entire caught and rescue is repeated thrice.

After this embarrassing moments ends for Gaurav, he starts getting prank calls from a girl who turns out to be his old college friend Shikha [Genelia D'Souza]. Shikha is staying with her guardian Anuradha [Shobhana], who happens to be Janardhan's OLD love. But when Shikha gets to know that because of her pranks Mannu (Rajpal), Gauravï¿½s employee, is getting into trouble she discloses the truth and she and Gaurav become friends.

Finally Shikha and Gaurav fall in love but before that they stumbles upon a truth ï¿½ Gauravï¿½s father and Shikhaï¿½s aunt, Anuradha, were lovers in their youth.


Gaurav and Shikha want them to reunite, but there are some issues. How the issues are solved forms the narrative of the filmï¿½

This is how the track for the movie keeps on changing. So the precise problem with Mere Baap Pahle Aap is that there is no concrete story. Itï¿½s a flimsy trip that holds itself together with numerous stories starting 1 after the other.

On the whole, Mere Baap Pehle Aap is enjoyable in parts - an entertaining first hour, a not-too-entertaining second hour. At the box-office, it's at best an average fare.

The film comes in a thick paper case. Also, the back side of the DVD cover mentions the outline of the movie and a few lines from certain selected reviews.

The film comes in a single DVD pack with the film's duration being 166 minutes, 21.43mins of Making of Mere Baap Pehle Aap, around 7-10mins of deleted scenes and 2.18mins of promotional video.

There is a 21 minutes capsule on the 'Making of the Film'. However, it is unexciting and hardly makes you revisit it after seeing it once 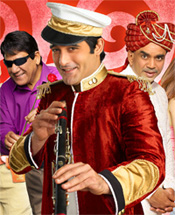 since it is one of those normal capsules of cast and crew of the movie talking about its storyline, its songs, narrating their experience while working with Priyadarshan. There is only little real 'Making of the film' footage.

There are three deleted scenes which was actually worth to be deleted from the film. Those would not have done anything else then increasing the total duration of the film.

Promotional video is just of 2mins 18secs containing the title track (Mere Baap Pehle Aapï¿½) of the movie which already appeared twice in the movie.

Three Chillies Out of Five! In short Mere Baap Pehle Aap is nice time pass movie to seen at home. It has its moments but not enough to warrant a trip to the theatres.