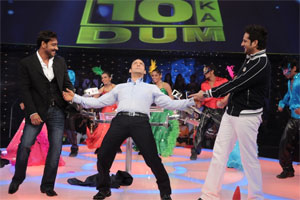 Sony's 10 Ka Dum is only going north when it comes to its entertainment graph. From Salman Khan's unexpected moves to interaction with the audience, seems like he has given the channel more than they'd bargained for. The latest is that the grand finale episode would be the best of all.

According to our source, "The whole crew of All the Best was there to play the game. Salman was very much encouraged by his friends Ajay Devgan and Fardeen Khan on the sets and let out some interesting secrets about their past antics."

Adds the source, "Apart from the All the Best team, few other special guests were also invited. This included Shivaji Satam and his C.I.D. team, Krishna and Sudesh from Comedy Circus and Abhijeet Sawant and Sourabhee of the Indian idol fame."

This eclectic mix of special guests apparently made the audience's day. Says the source, "Krishna and Sudesh put up a wonderful comedy act that had everyone hurting their tummy! The Indian idol chaps too gave a wonderful performance of song and dance."

We contacted Abhijeet Sawant who says, "Yes, it was the first time I met Salman Khan. It was fantastic. I sang 'Jeene ke hai chaar din' one of Salman's hit songs. I also mimicked his 'towel dance' and it had him laughing the whole time… both onscreen and off-screen! This experience is one of those that I'll cherish for a long time."

Catch the grand finale of 10 Ka Dum on Saturday, October 17 at 9 pm on Sony Entertainment Television.

+ 2
13 years ago will wait for the 3rd season of DKD....salman rocks and so does the show because of him

hopefully will watch it :)

+ 2
13 years ago ilove love love salman khan!! i will miss seeing him every saturday :(