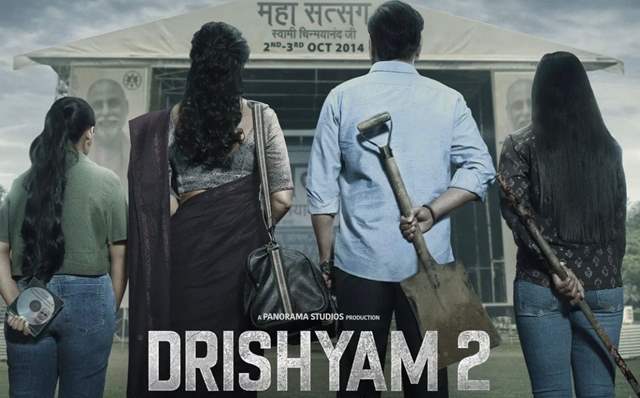 Ajay Devgn is hyping the audience for Drishyam 2 by each passing day. Recently, the actor shared some old bills from his most loved movie Drishyam.

Fans have been intrigued ever since the actor announced the sequel of the first part. Well, now the actor took to his social media account and shared another exciting poster of the film as the teaser is all set to release tomorrow.

Sharing the poster on his social media account Ajay wrote,

In the poster, the Salgaonkar family can be seen standing outside the maha Satsang mandap. While Vijay can be seen holding digging tools while his wife is carrying a black leather bag and his younger daughter holds a cd. The poster also reads Vijay Salgaonkar and family are back.

Fans are already excited to see how the story unfolds in the second part of the film.

Ajay Devgn's 2015 Drishyam showed his character Vijay Salgaonkar tricking the police after his daughter accidentally kills the villainous son of a cop (played by Tabu). Vijay narrates a fake story and uses some bills to back up his claim. It was a remake of the hit Malayalam film with Mohanlal in lead.

The film has been directed by Abhishek Pathak and produced by T-Series and Panorama Studios. Drishyam was also remade in Tamil, titled Papanasam. Kamal Haasan stepped into the shoes of Mohanlal in the film