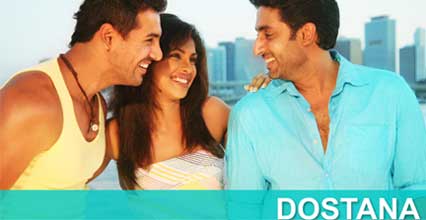 Talks of a sequel for KJo's controversy evoking 2008 blockbuster Dostana have long past the stage of just circulating rumours. When John and Abhishek both jumped at the offer to continue into part two, the foundation stone had been firmly placed. John even went as far as claiming that buddy and colleague Abhishek was the most beautiful co-star he had worked with!

It then only remained to be seen who would complete the trio and take on the role of the leading lady. When Dostana had first been in the making Kareena Kapoor was the one initially approached for the role, which at that point, she had rejected primarily to avoid working with sister Karishma's ex-beau, Bachan Jr. However, if rumors are to be believed then we may just get to see Bebo sharing screen space with her co star from debut venture Refuge once again.

On his part, director Tarun Mansukhani hasn't been very forthcoming with information - neither confirming or denying Kareena's presence in the cast.

So until a formal confirmation is made we can only wait and be hopeful that the once good friends will bury the hatchet and come together for an entertaining sequel to Dostana; which will see the 'gay couple' John-Abhi shift bases from Miami to London.
Featured Video